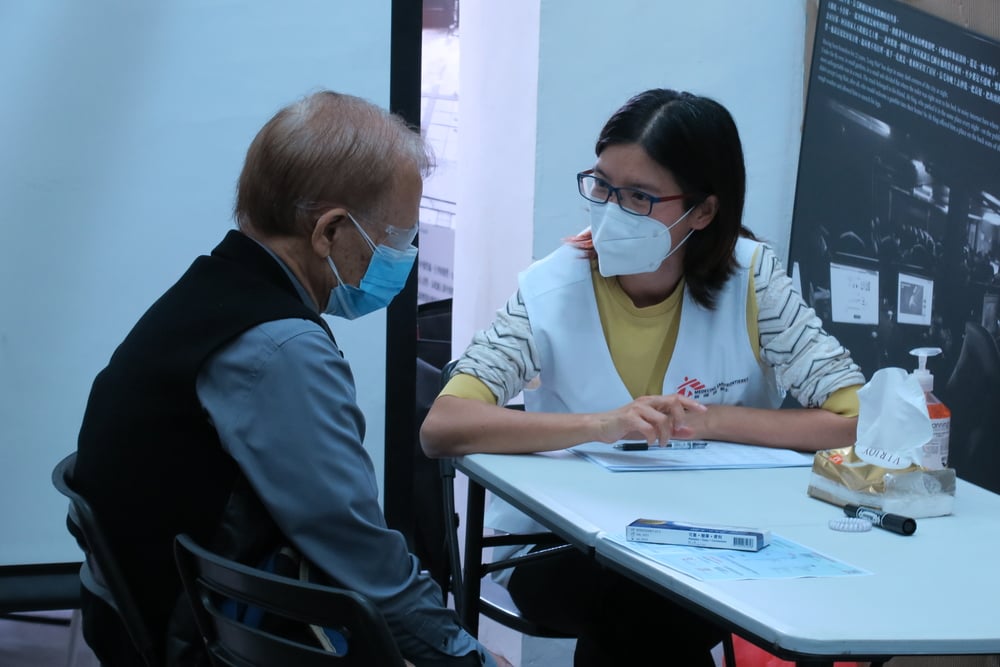 This week, MSF will be appearing before the House of Commons Standing Committee on Foreign Affairs and International Development on the subject of Vaccine Equity and Intellectual Property – a subject the committee has already been holding meetings on since March. This next session will be available here, but MSF would like to offer some additional observations on issues that have arisen during these meetings thus far.

The issues under discussion during this committee session are relevant not simply to the current COVID-19 pandemic, but also for the future. It must be remembered that conversations on vaccine equity are taking place against the backdrop of the new Pandemic Treaty being negotiated under the auspices of the WHO. The shadow of vaccine (in)equity hangs over these negotiations; Canada’s actions, and inactions on vaccines may influence how it is perceived by other countries at the Pandemic Treaty negotiating table.

The failure of the international community to come to an agreement on the narrow issue of time-limited loosening of intellectual property rules during the pandemic – exemplified by the TRIPS Waiver, first proposed in the fall of 2020 – is not a promising sign for the negotiation of a far more ambitious treaty. During Standing Committee meetings thus far, some have rather cynically suggested that proposals such as the TRIPS Waiver are no longer relevant, now that global vaccine supply is no longer the primary bottleneck limiting vaccinations. This is akin to bickering over whether to phone an ambulance, then deciding because the patient died before an agreement to call an ambulance was reached that inaction was the right course of action the whole time. It also does nothing to prepare for the next time somebody gets sick and needs an ambulance.

Also not promising is Canada’s steadfast refusal to actually adopt a public stance on the issue. Despite reiterating platitudes about supporting a consensus solution at the WTO, Canada does not appear to actually have deeply held convictions, let alone the courage to assert them. This is all the more obvious when a sizeable majority of WTO member countries – more than 100 – have voiced support for the TRIPS Waiver. Meanwhile, during Standing Committee meetings, Canada’s Ambassador to the WTO has refused to comment on the ideas underpinning widely circulated draft proposals, such as the recent alternative “Quad” proposal, which is the opposite of the kind of leadership Canada could, and should, be showing.

As for MSF’s perspective on the recent “Quad” proposal text: We do not think it is sufficient or appropriate; indeed, we are concerned that this proposal may set a harmful precedent for the future that actually makes existing TRIPS flexibilities harder to use. Members of the WTO should be seizing the opportunity to take action to improve access to medicines and vaccines not only for COVID-19, but for the next pandemic; they certainly should not be making the situation even worse. Our detailed analysis can be read here.

One bizarre element of the hearings held by the House of Commons Foreign Affairs committee on Vaccine Equity and Intellectual Property so far this month has been the reemergence of reference to Canada’s Access to Medicines Regime (CAMR).

In brief, CAMR is Canada’s legal mechanism for operationalizing Article 31bis of the WTO TRIPS Agreement, allowing compulsory licensing of patented pharmaceuticals for export (in other words, letting Canadian companies other than the patent holders make drugs for export to countries without their own manufacturing capacity). Canada initially pushed CAMR and Article 31bis at the WTO in December 2020 as an illustration of why the TRIPS Waiver was unnecessary. Since that time, Canada has, ironically, been steadfast in its refusal to take any of the steps necessary to put its own recommendations into practice. Despite calls from NGOs (including MSF), academics, Canadian pharmaceutical companies, and foreign governments, Canada has shown zero signs of taking the first step: Amending Schedule 1 of the Patent Act to include COVID-19 vaccines and medicines, thereby making them eligible for CAMR in the first place.

This, to be clear, is the bottleneck for CAMR. For this necessary change to happen, the Minister of Health and the Minister of Innovation need to make a recommendation for this amendment to the Governor in Council (per s.21.03(1)(a) of the Patent Act). Until they do so – which, once again, they show no signs of doing – the point is moot. Canada is the barrier to implementing Canada’s own recommended course of action.

MSF’s position has always been that CAMR, and Article 31bis more broadly, are ineffective tools at the best of times, and completely inappropriate ones in a pandemic; however, if Canada wants to push CAMR as a tool, then it is up to Canada to actually follow through. You can read MSF’s briefing on CAMR and the TRIPS Waiver here.

Another issue that some are cynically framing as no longer relevant is Canada’s performance on donating vaccines to other countries. Here too, however, there are vitally important lessons to learn about what Canada could and should have done.

By late 2020, Canada was widely recognized as the country that had secured the most doses of COVID-19 vaccine per capita of any country in the world, with more than ten doses secured per person. However, Canada did not even formally commit to donating a single one of its own bilaterally-acquired doses until July 2021 – the same month it received enough doses to double-dose everyone eligible – and did not deliver a single dose to COVAX, the international COVID-19 vaccine sharing mechanism, until September 2021. Thus far, Canada has delivered less than 15 million doses of vaccine to other countries, either bilaterally or through COVAX. By contrast, it has administered over 18 million third doses alone domestically. Meanwhile, recent media reports  note that at least 1.2 million vaccines have expired in Canada in 2022, and millions more will expire in the coming months.

It is true that at the moment sharing doses is no longer the biggest priority. Indeed, Canada is having a hard time sharing doses, because, quite simply, there are more doses available than countries can use in the short term, particularly in places lacking supplies and infrastructure to turn vaccines into vaccinations. However, Canada and other high-income countries were warned months ago that this might happen: by hanging onto unused doses for months rather than sharing them immediately, high-income countries risked precisely this sort of glut of supply, where a surge of donations overwhelms the ability of recipient countries to use them before they expire. MSF wrote about this issue here.

There are lessons here for the future. Canada has trumpeted its first-doses-fast approach at home; instead of extending this abroad, however, it chose to store millions of doses in freezers for months, helping nobody. Canada’s Central Vaccine Inventory alone – so not counting millions of doses distributed to provinces – consistently held more than 9 million doses throughout the fall, even after the government said in August it would maintain a stockpile of 4 million doses before sharing. Sharing a steady supply of such doses since last summer would have prevented doses from going to waste. More importantly, it would have saved lives.

Speaking of which, the risk of Canadian vaccine supplies expiring has long been an open secret. However, it has been hard to quantify, as both Canada and the individual provinces have been remarkably opaque when it comes to making data on expired doses and expiration dates public. Meanwhile, even as countries like Canada hide these numbers at home, headlines blame lower income countries, particularly in Africa, for allowing doses to expire. This problem is compounded by the fact that donated doses have often arrived with only a short period before expiry; sharing doses close to expiry places burdens on countries least equipped to meet them.

Canada needs to be public about the expiration dates of its vaccine supplies, including when existing stocks will expire, and how many have expired already. If Canada can provide near-daily updates on how many doses of vaccine have gone into arms, there’s no logical reason it cannot do the same for doses that end up in the trash.

Another bad penny that keeps coming up in these Standing Committee hearings is Canada’s “equivalent” donations. Unlike many countries, Canada has framed its vaccine donations as a combination of in-kind and “equivalent” doses. Its underwhelming performance in delivering in-kind doses is plain to see. However, it likes to claim that the equivalent of “approximately 87 million doses” have been delivered to COVAX. MSF has already questioned this claim in detail, including the need to show receipts.

Many key questions remain unanswered. For one, how many is “approximately” 87 million doses? Canada’s most recent shipment via COVAX was just 21,600 doses (to Madagascar). That’s not even one quarter of one tenth of one percent of 87 million, so it would be helpful if Canada could offer more precise figures about what it is actually donating, rather than simply rounding up (or down) to the nearest million. Another important question is which vaccines were purchased, and at what cost? Different vaccines cost different amounts, so the same financial donation buys different amounts of different vaccines. And most importantly, what is the actual status of these vaccines?

There’s no real question that Canada has delivered money to COVAX, but there are also big questions about the delivery status of the vaccines purchased with that money. After all, one of the reasons COVAX became so dependent on physical dose donations in the first place is because it had been shoved to the back of the procurement queue. If Canada can’t answer these questions, then it may be able to credibly say how much cash it has given COVAX, but it cannot credibly claim credit for delivery of these vaccines.

Think of it this way: If Canada is doing its holiday shopping online, do gifts count as delivered once Canada clicks the order button? Or do those gifts only count as received once they’ve actually been delivered to the recipients?

One area where Canada has the unique opportunity to do something positive is in relation to Canadian-developed technology that has proven crucial to the pandemic response. The lipid nanoparticle technology underpinning mRNA vaccines like Pfizer and Moderna was invented in Canada, by companies spun off from the University of British Columbia. Canada should be proud of this achievement. More than that, Canada should be making sure lifesaving Canadian technology gets to all who need it. Instead, Canada has been bizarrely silent on technology transfer of lipid nanoparticle technology. To get Canadian companies to share this technology, Canada could use sticks, it could use carrots, or a combination of the two; at the moment, Canada’s response has been crickets.

This feeds into broader discussions moving forward about Canadian research and manufacturing. Here, a rule of thumb should be that public investments for public health should, first and foremost, yield public benefits; they should not be subsidies for incredibly profitable companies who retain all decision making over affordability and access. Canada should support R&D and domestic production, but with strings attached to ensure drugs and vaccines reach the people who need them, which is ostensibly the reason for encouraging their creation in the first place.