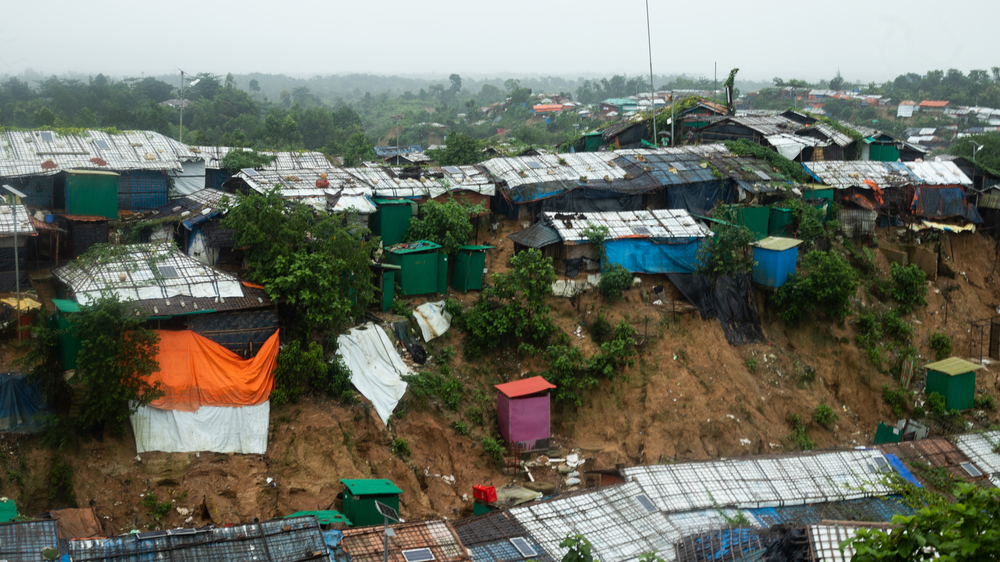 Bangladesh: Between a rock and a hard place – Rohingya refugees in Cox’s Bazar

There are currently around 860,000 Rohingya refugees in Bangladesh. Most of them live in Cox’s Bazar district. The activities which Doctors Without Borders/Médecins Sans Frontières (MSF) carries out for these refugees are centralized around the so-called ‘mega camp’, a large collection of 26 camps. In recent years, barbed and razor wire fencing was erected. The living conditions for the refugees keep deteriorating due to COVID-19 measures, among other factors. Bernard Wiseman is head of mission in Cox’s Bazar, Bangladesh and describes the hard dilemma the Rohingya are facing there.

“There has been a sharp deterioration in living conditions in the refugee camps over the past 12 months. The presence of police and the military has increased; at the same time, armed groups have expanded their power base in the camps. As a result, we are hearing about more kidnappings, violence and extortion.

The arrival of COVID-19 resulted in more restrictions on the refugees’ freedom of movement and on access to the camps for international humanitarian groups. In 2020, services inside the camps were reduced to the bare essentials and some organizations had to stop working in the camps altogether. In the early months, our teams had limited access, which led to a reduction in the quantity and range of health services we were able to provide to the Rohingya population.

The Rohingya increasingly face a terrible dilemma. Many are becoming more and more desperate and hopeless as conditions in the camp continue to deteriorate, which makes them turn to risky choices. In order to escape, some choose to make the perilous journey on human trafficking boats departing for Malaysia, and others sign up to be relocated to the remote island of Bhasan Char, despite all the question marks about their future there.”

What can you tell us about the island of Bhasan Char?

“The island of Bhasan Char is a sand bar in the middle of the Bay of Bengal. It didn’t exist until 2006 and has never been inhabited. After the 2017 refugee crisis, the Bangladesh authorities imagined Bhasan Char as a place to relocate some of the almost one million refugees who had arrived from Myanmar. About 14,000 refugees were relocated there since December 2020, while the government eventually plans to relocate around 100,000 people. However, questions remain about the suitability and sustainability of the island: it is located about 60 km from the mainland and the only available mode of transport to the mainland is a shuttle managed by the Bangladesh military.

There are currently around 20 former MSF patients on the island and we are still in touch with them. Their first reaction to living conditions on the island was generally positive. It’s not difficult to understand why: the buildings are concrete with metal roofs, which is certainly an improvement on the small mud and bamboo structures they have been living in for the past three years.”

What are MSF’s concerns about the relocations to Bhasan Char?

“From a medical perspective, we are very concerned. We understand that only very basic primary healthcare is being provided by local NGOs. As far as we know, secondary and specialist health services are not available. We don’t know how patients requiring emergency medical care are transferred to hospital from the island, given the fact that it is a three-hour boat ride from the mainland. There has been very little engagement with Rohingya refugees or health providers in the camps in Cox’s Bazar to discuss how to ensure access to medical care on the island. We are trying to establish referral networks to ensure continued care to our former patients suffering from chronic illnesses, who require continuous follow-up and medication.

Overall, the Bhasan Char situation is a symptom of the wider deterioration in living conditions in the refugee camps in Bangladesh, and is just one of many issues which the Rohingya have faced for decades – an ordeal which includes state-sanctioned violence, persecution, discrimination and the denial of their basic rights.

The relocation to Bhasan Char is a consequence of the failure of the international community to provide a solution to what has become a protracted refugee crisis. Until a long-term solution is put in place, we will continue to see policies that seek to restrict and contain refugees and prolong the ‘temporary’ and unsustainable nature of the ongoing situation for the Rohingya refugees.”