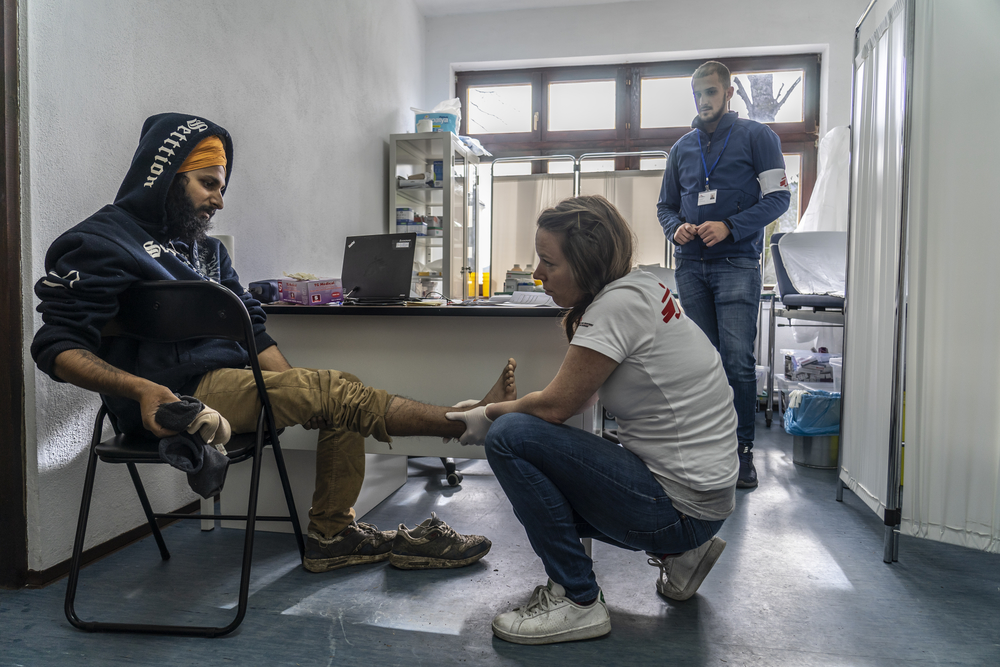 Migrants and asylum seekers continuously face barriers to their safety. They face violence, policies that endanger them and a lack of access to necessary medical care. Harsh climates are an additional layer of health risks for people in vulnerable situations. In Bosnia, migrants and asylum seekers face cold winters without having proper resources. Doctors Without Borders/Médecins Sans Frontières (MSF) runs a clinic to provide medical and mental health services.

It’s 8:30 a.m. and the temperature is close to zero in Zavalje, a tiny Bosnian village near the border with Croatia. Khaan* and 30 other men stand in the doorway of the local medical centre. They are waiting to be seen by the MSF medical team, who provide medical and mental health services in this small clinic four times a week. Khaan’s clothes are dirty, he wears no jacket and his shoes – which have no shoelaces – are covered in mud.

“Two weeks ago I was in 'the game’ – which is how we call it when we try to cross the border to Croatia,” say Khaan. “But the Croatian police caught me and everyone in the group. They beat us up, they took our jackets, bags, phones, money and shoes. Then they sent us back to Velika Kladusa in Bosnia. In my group there were also children as young as 12. The police beat them also. This is what always happens.”

Khaan is one of the 20,000 or so people to arrive in Bosnia this year in the hope of continuing their journeys north. With increasingly restrictive security measures along the Balkan borders, thousands of people continue to look for alternative routes to seek protection in other European countries. The dire living conditions as winter approaches, combined with allegedly violent pushbacks from Croatia, have turned Bosnia into one of the toughest migration bottlenecks in Europe.

At night, with temperatures close to zero, almost 4,000 people try to sleep in abandoned buildings and makeshift shelters around the border cities of Bihac and Velika Kladusa or in tents in Vucjak camp. This camp was supposed to be a temporary solution offered by the local authorities in an attempt to provide shelter to those left outside the official camps. But this camp fails to meet any humanitarian standards. It is also situated in an area littered with landmines, whose soil is contaminated with methane, a very flammable gas. Despite these major issues on November 13, the authorities announced that the camp will stay as it is throughout the winter and will be used to house new arrivals.

“The situation is very hard here – I never had to sleep in a tent before,” says Muhallil* from Pakistan. “At night the cold passes through the tent, and when it rains the water gets inside the tent. The food is really bad, the toilets are so dirty that we cannot use them, and the water for showers is freezing cold.” Muhallil has been staying in Vucjak with his 16-year-old brother for the past two months. As he talks, his companions bake flatbreads on a fire they have lit inside the tent they all share. 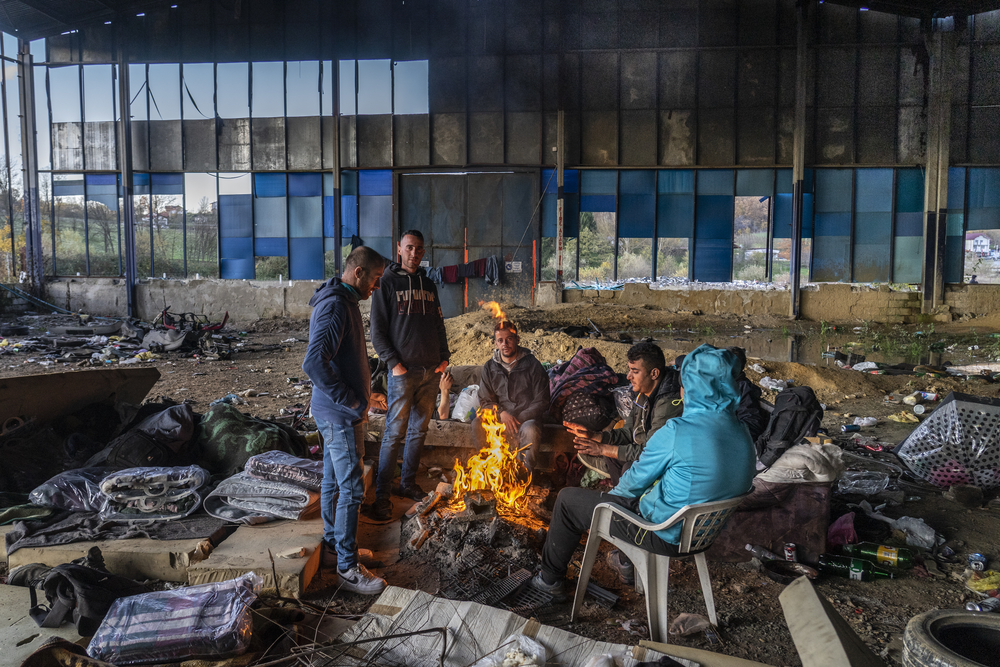 Anna Pantelia/MSF
A shelter where some migrants and asylum seekers stay near Velika Kladusa.

“Vujcak camp is a dangerous and inhumane place – no human being should have to live like that,” says Nihal Oman, MSF’s deputy field coordinator. “People arrive at our clinic from Vucjak in flipflops, without socks or jackets, a lot of them suffering from respiratory infections and from skin diseases caused by the horrific living conditions. It’s heartbreaking to see and treat these people, knowing that at the end of the day they will have to go back to a tent and sleep on the floor. It is unacceptable to hear that this camp will remain open. It should be closed now.”

Since August, MSF, working with the Bosnian Ministry of Health, has relaunched its medical programs in two locations in this part of Bosnia to address the health needs of migrants and asylum seekers who are staying outside official centres, with a particular focus on victims of violence and sexual violence. Since then, MSF’s medical teams have provided around 1,200 consultations to people who would otherwise have no medical care. Many of MSF’s patients are unaccompanied minors.

“People who are not registered in official camps have no access to any kind of services and are more exposed to the risk of violence,” says Osman. “Our response is designed to reach this group, who are most at need. Unless the authorities provide safe, appropriate, winterized accommodation and adequate services to these people, we fear that it’s only a matter of time before we see people dying.”

*Names have been changes to respect the privacy of our patients.