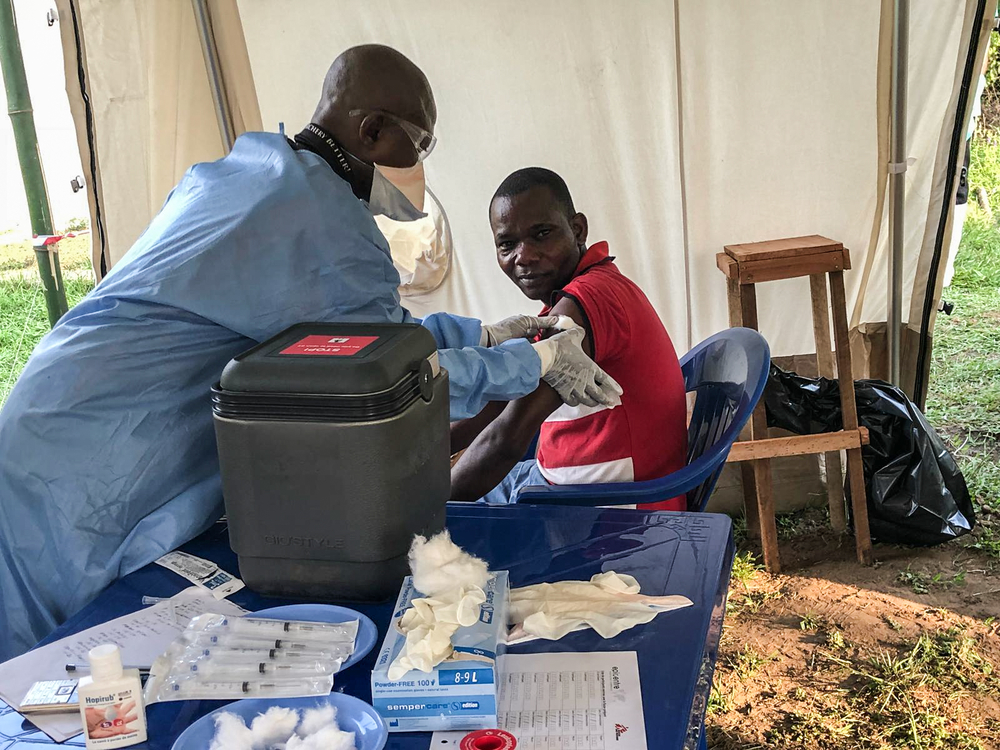 Kinshasa, May 29, 2018 - Doctors Without Borders/Médecins Sans Frontières (MSF) started vaccinating Ebola frontline workers yesterday in Bikoro, Equateur Province, Democratic Republic of Congo (DRC), where the organization has been working with the Ministry of Health and the World Health Organization (WHO) over the past few weeks. This trial vaccination will also be offered to contacts of patients.

The Ebola vaccine (rVSVDG-ZEBOV-GP) is being used as part of the overall strategy to control the Ebola outbreak. This investigational vaccine has not yet been licensed and is being implemented through a study protocol, which has been accepted by national authorities and the Ethical Review Board in Kinshasa, as well as MSF’s Ethical Review Board. The protocol defines to whom, when and how the vaccine should be given.

Participants receive information on the vaccine before consenting, and will be carefully monitored over a period of time. Participation is voluntary and the vaccination is free. 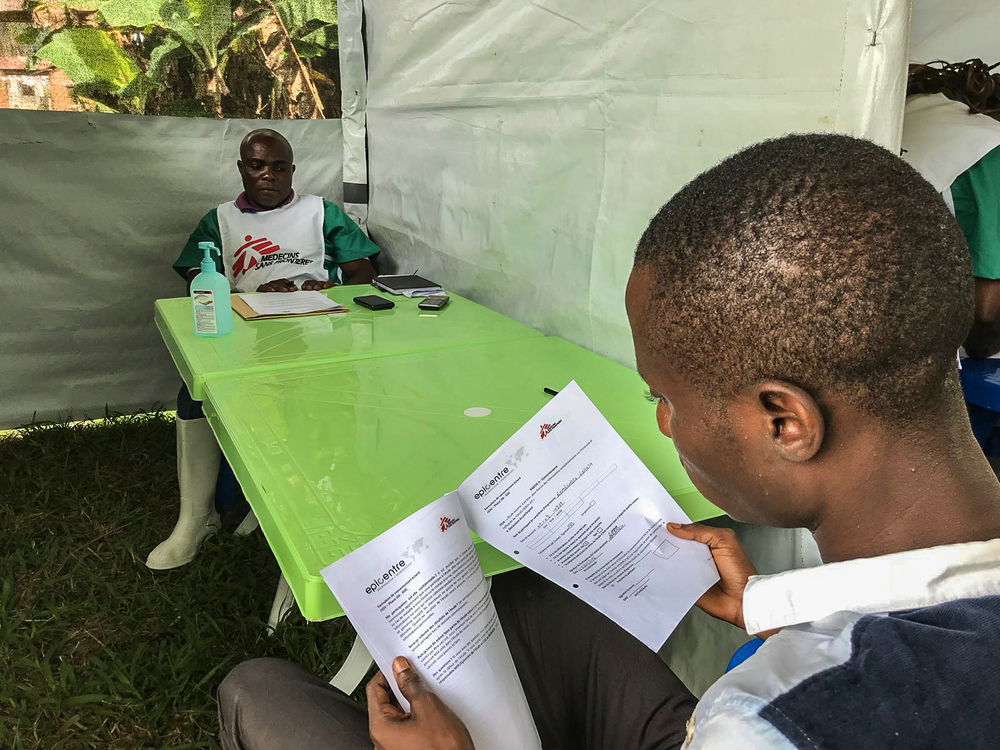 Louise Annaud/MSF
Participants in the vaccination receive information on the vaccine before consenting, and will be carefully monitored over a period of time. Participation is voluntary and the vaccination is free.

The vaccination will be administered using a ‘ring’ approach. This involves identifying newly diagnosed and laboratory-confirmed Ebola patients and locating the people they have been in contact with. These people and their contacts — often family members, neighbours, colleagues and friends of the patient — will constitute the ‘ring’. Ebola health workers in the affected area will also be offered the possibility of vaccination, as they are most at risk of exposure to the virus and as such of developing the disease.

Ring vaccination ensures that the vaccination of persons who are in the ‘ring’ create a buffer zone — or protective ring — to prevent the spread of infection.

In collaboration with the Ministry of Health, WHO and other agencies, MSF and its epidemiological research arm Epicentre were involved in vaccine trials in Conakry, Guinea at the end of the Ebola outbreak in 2015.

“Based on the results of these trials, we are confident in using the vaccine for this current outbreak," says Micaela Serafini, Medical Director of MSF in Geneva. "Given that it has not yet been licensed, we will be closely monitoring the vaccination. The results of the trial suggest that the vaccine will present a real benefit to people at high risk of contracting Ebola, protecting them against the infection. However, vaccination remains just one additional tool in the fight against the disease. Identifying patients and contacts is the first step."

People who are vaccinated continue to follow the same infection control protocols as before and Ebola health workers will continue wearing protective equipment. The ‘pillars’ of an Ebola intervention must continue in order to stem the spread: 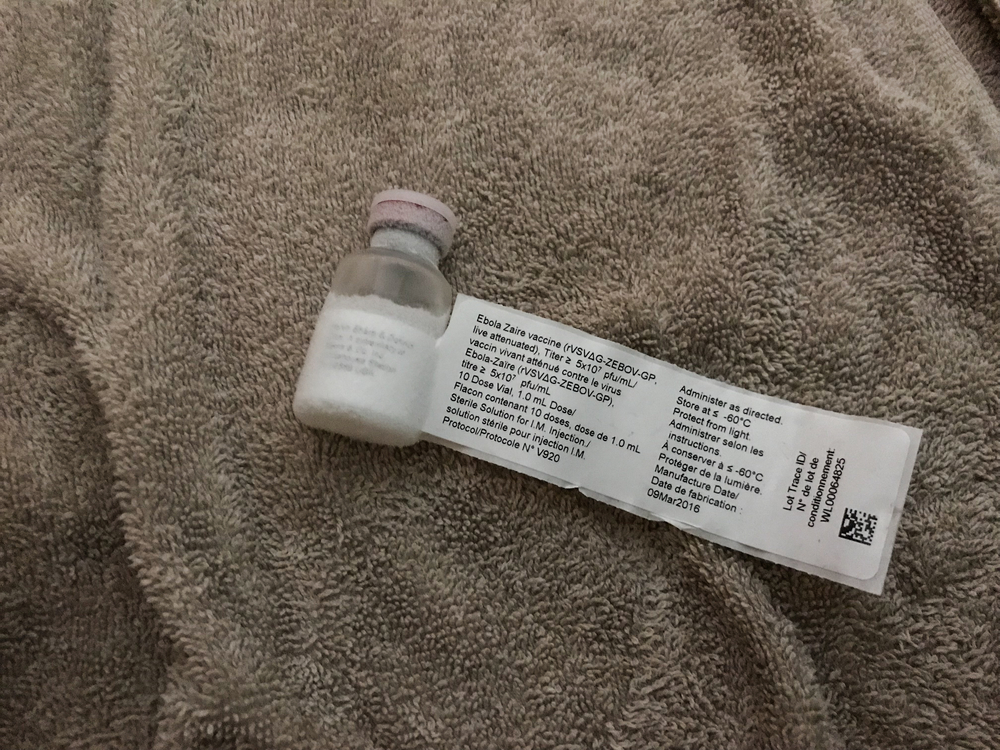 Louise Annaud/MSF
Close-up of the Ebola Vaccine (rVSVDG-ZEBOV-GP) that is being used as part of the overall strategy to control the Ebola outbreak. This trial vaccine has not yet been licensed and is being implemented through a study protocol.

MSF teams in the field

The current outbreak was declared on 8 May, in the North West of the country. As of the 28 May 2018, there had been 35 confirmed cases of Ebola resulting in 12 deaths, according to figures from DRC’s Ministry of Health. MSF teams are working in four places to take care of patients and to stem the epidemic.

MSF teams are currently in the areas of Mbandaka and Bikoro, where they have put in place two Ebola Treatment Centres (ETC) with 12 and 20 beds each. Teams are also tracing people who have been in direct or indirect contact with confirmed Ebola cases. In parallel, they are trying to raise awareness with communities to, among other things, limit exposure and encourage safe burial practices.

There are also MSF teams working in the remote areas of Itipo and Iboko. A transit centre with 10 beds has been set up in Itipo, where people suspected of having Ebola are isolated and receive care while waiting for laboratory diagnosis. If they test positive for the virus, they are transferred to the Bikoro ETC. In Iboko, an isolation area has been set up in the hospital and the team is building a new ETC.

Some of MSF’s most experienced Ebola field workers, including medical personnel, experts in infection control and logisticians are on the ground in Equateur Province.