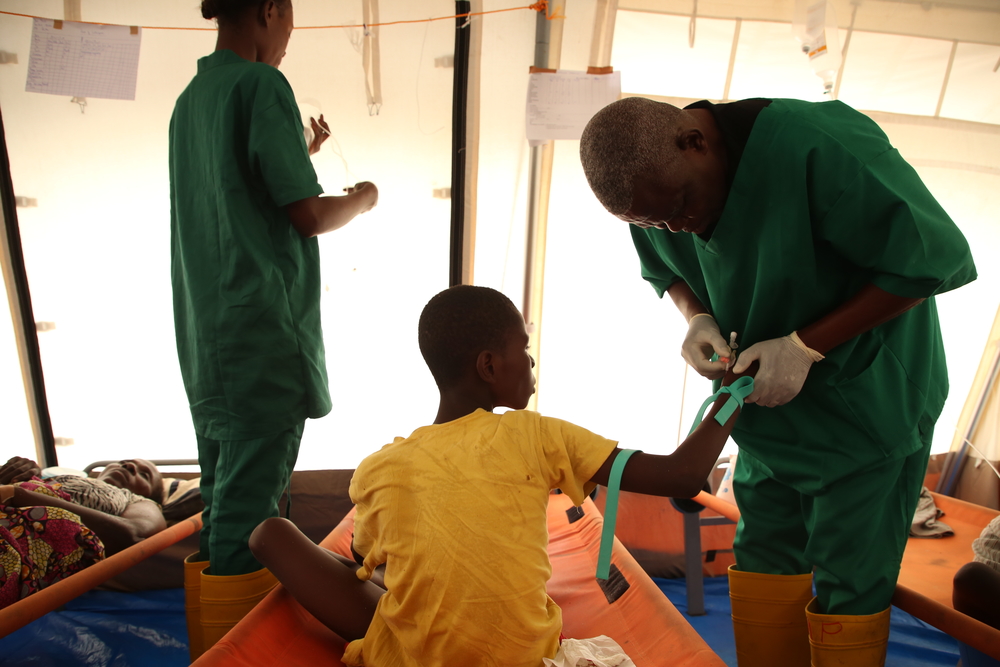 Democratic Republic of Congo is currently facing its most significant cholera outbreak for 20 years: in 2017, 55,000 people fell ill across 24 of the country’s 26 provinces, and 1,190 died. Doctors Without Borders/Médecins Sans Frontières has been at the forefront of the medical and humanitarian response, treating half of the cases (about 25,300 people) across the country.

The epidemic has now reached the country’s capital, Kinshasa. This megapolis of 12 million people is the nerve centre of the country’s trade and home to one in every six Congolese. It is vulnerable to cholera because of a lack of drinking water, a lack of sanitation, and a lack of health infrastructure that is properly adapted to provide treatment in cholera-affected areas. From the end of November 2017 until  January 22, 2018, health authorities indicated 826 suspected new cases and 32 deaths.

To contain the epidemic, teams from MSF’s Congo Emergency Pool are bolstering the two cholera treatment units (CTUs) in Camp Luka and Pakadjuma, so ensuring 24/7 patient care in the most affected health zones (Binza Méteo, Kitambo and Limete). From the beginning of activities (January 16, 2018), MSF has treated 157 patients.

“Faced with the spread of this epidemic, as of last week we have stepped up our intervention by treating patients in the treatments units, and by putting in place 10 rehydration points, epidemiological surveillance activities and education, and an ambulance service,” says Jean Liyolongo, from MSF’s Emergency Pool in Congo. “Cholera is affecting the parts of Kinshasa that are densely populated, so it’s crucial to act quickly to prevent the spread of this epidemic. By providing quick and free treatment for patients, alongside support to healthcare providers, we can ensure proper care for those who are ill.”

In areas where access to drinking water and sanitation is poor, cholera is a highly contagious disease. The illness causes severe diarrhea and vomiting, leading to patients becoming rapidly dehydrated. Present in the country since the 1970s, it is endemic to nine provinces of DRC, especially around the Great Lakes in the east of the country.

“A few days ago I got very ill, with severe diarrhea and vomiting. In my neighbourhood, here in Camp Luka, there were already a lot of cholera cases. That’s why I asked my husband to take me to the health centre,” says Marie, a patient in MSF’s health centre in Camp Luka. “I was very weak and so we tried to take a moto-taxi but everyone refused us. Here in Kinshasa there’s a lot of stigma attached to cholera, it’s a shameful illness. My husband had to carry me on his back for three kilometres to get me here.”