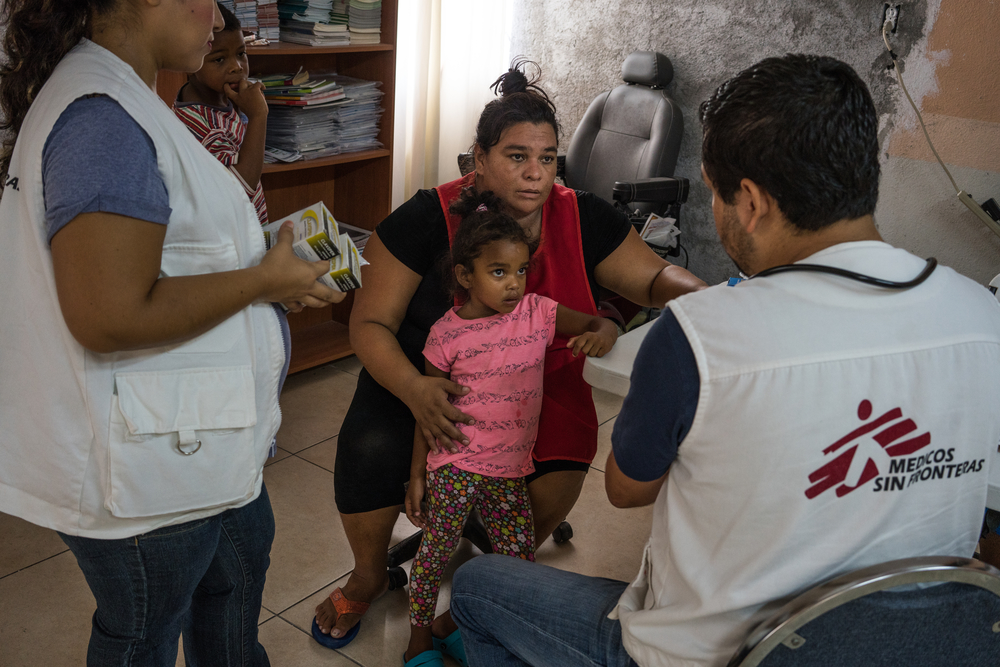 MSF Pulse: Violence and migration from Central American — why are people seeking asylum in the US?

The US government under President Donald Trump is stepping up deportations and dismantling legal protections for refugees and asylum seekers, yet people are still seeking asylum in the US.

In this episode of MSF Pulse, we look at why so many people fleeing countries like Honduras, Guatemala and El Salvador continue to risk trauma, separation, deportation and incarceration in the US.

Every year an estimated 500,000 people ﬂee extreme violence and poverty in the Northern Triangle of Central America, which includes Honduras, El Salvador, and Guatemala. Despite catastrophic conditions in the region, the United States and Mexico have focused efforts on detention and deportation rather than on providing safety and support. Doctors Without Borders/Médecins Sans Frontières (MSF) teams offer medical and psychosocial care to displaced people in Central America and Mexico.

Stephanie Puccetti is a humanitarian aﬀairs advisor for MSF's office in the United States. She recently travelled through Honduras, Mexico, and along the US border to gather information about the challenges facing migrants and asylum seekers. As part of a global team that represents MSF’s operations to key stakeholders—including governments, intergovernmental organizations, and other humanitarian groups—she works to ensure that those making decisions at the political and policy levels understand the implications for crisis-aﬀected communities. Through sharing perspectives from our staﬀ in the ﬁeld and from our patients, MSF aims to protect and expand the space for medical humanitarian action.

Why is the humanitarian crisis in Central America a priority for MSF? Aren’t there far worse conditions elsewhere in the world?

We have seen an increasing number of Central Americans ﬂeeing horriﬁc violence in their countries and undertaking a dangerous journey through Mexico in recent years. MSF works in conﬂict-affected countries across the globe, and the experiences of our Central American patients are hauntingly similar to those whose lives have been uprooted by war. In 2016, El Salvador and Honduras were ranked second and fourth worldwide, respectively, for the rate of violent death, joining Syria and Afghanistan in the top ﬁve.

We are concerned about the effects of this violence on the health and wellbeing of our patients, and the lack of protections and support services available to them.

US refugee law provides legal protection to people in need of asylum. However, a decision this year by the US Attorney General to eliminate domestic violence and gang violence as legal grounds for asylum now endangers thousands of people facing legitimate, well-founded threats. This change almost universally bars Central Americans ﬂeeing violence from seeking protection in the US. It’s important to understand that asylum is different from other types of immigration, and provides vital protections for people ﬂeeing violence and armed conﬂict. The right to seek asylum is guaranteed under domestic and international law. MSF is urging the US government to fully recognize the humanitarian and international protection needs of Central American asylum seekers.

Is it feasible for people to stay in Mexico instead of going to the US?

On paper, Mexican law offers some protections for asylum seekers, but in reality it is difﬁcult for Central Americans to obtain legal asylum and adequate protections in Mexico.

Can you describe the speciﬁc conditions driving displacement in Honduras?

The nature of gang-based violence in Honduras is extremely targeted and personal — it can follow you throughout the country. We heard from families who were forcibly displaced four or ﬁve times before they made the difﬁcult decision to cross the border. It’s not a choice people are making lightly. Leaving the country to seek asylum is often the only option for survival.

The Honduran government has acknowledged the crisis and estimates that around 200,000 people are internally displaced. Unofﬁcial estimates place this number closer to half a million. In other contexts with this number of displaced people, there are dozens of specialized nongovernmental organizations and an established humanitarian response infrastructure. In Honduras, this expansive system does not exist. There is an active civil society and a few international organizations, but underfunding is a major issue. Many of the services we would expect to see in other crises of this scale are simply not available.

Are there unique risks for people deported back to Central America?

There are large numbers of people returned to Central America from the US who did not have legal status or whose asylum claims were rejected. If someone initially ﬂed their home due to a threat on their life, that threat will likely still be there when they return. It can be difﬁcult to ﬁnd safety at home, so many people see no choice but to leave the country again.

Following the Trump Administration’s decisions to revoke Temporary Protected Status (TPS) for Hondurans and Salvadorans living in the US, we are particularly concerned about the many thousands of people who will be forced to return to a country where they may be exposed to signiﬁcant violence and separated from their protective social networks.

What are your upcoming priorities regarding Central America?

I’m working with our teams in Central America and Mexico to improve our regional analysis and develop a multi-country strategy for engagement.

I am also looking at the effects of US foreign policy on violence and displacement in Central America. The US provides a signiﬁcant amount of ﬁnancial assistance to the region, and interventions are currently focused on addressing the root causes of migration, for example trying to improve economic and security conditions.

But this long-term approach ignores the immediate needs of vulnerable people who continue to face extreme violence and who have been forced from their homes. The US and other donors must provide greater support for urgent humanitarian assistance.

Témoignage — or bearing witness — is at the core of MSF’s mission. How do you balance this with other principles, such as impartiality and neutrality, when engaging at a political level?

MSF is known globally as an independent organization that has a unique commitment to humanitarian principles. We witness and share objective information about the effects of policies on our patients. If we see that civilians are being harmed or a population doesn’t have access to medical care, regardless of which actor is responsible, we voice our concern and push for action.