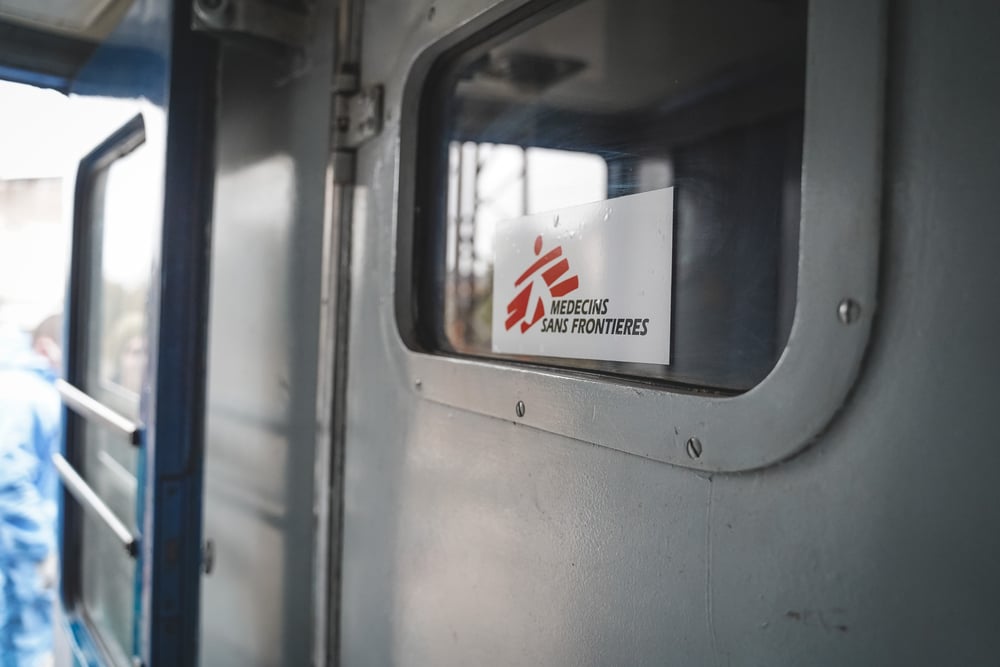 Ukraine: “You have a medical train? I have patients for you”

How the patients were selected for Doctors Without Borders/Médecins Sans Frontières (MSF)’s first medical train referral in Ukraine.

On the morning of Friday, April 1, 2022, MSF finalized its first medical train transfer of patients in Ukraine.

Nine patients in serious but stable condition were transferred from a hospital in Zaporizhzhia, in the southeast of the country, to major referral hospitals in Lviv, on a dedicated medical 2-carriage train that MSF has developed together with the Ukrainian Railways. The patients were accompanied by a team of nine MSF medical staff. This is a first short medical train, and a larger more highly medicalised referral train is being developed by the MSF team.

Dr. Joanne Liu, an experienced paediatrician in MSF’s Ukraine medical response team, recounts her part of the process, evaluating the patients and making sure they were all stable for the journey:

On Tuesday, March 29, 2022, we went on a visit to Zaphorizhzhia and met the regional health director. We said we wanted to hear from him if there are any things he needs from us. He said he’d heard a story about a train for medical transfer, and he was very interested. He said he had patients who needed to be referred.

We said: OK – let’s go and see your patients.

Most of the patients we saw had been wounded in, or while trying to escape from, Mariupol. One patient had big open fractures, and both legs on vacuum drainage. Fairly stable, but a very sick child.

Of course, it makes sense to offload hospitals that are close to the frontline to enable them to have more bed capacity. But we needed to make sure we’d be transferring the patients to somewhere where they will get the same level of care, if not higher level of care. And we just wanted to make sure this would be safe for everybody.

We talked with the parents to ask if they wanted medical evacuation or not. The first mother said: “I want my child to be medevacced because I think it is the only chance for my child to keep his legs.” And the child looked at us and said: “I want to walk again”.

By then it was the end of the day and we had to leave to be able to pass checkpoints. So we said we cannot promise anything, we’ll see what’s possible. And the hospital director and many of the interns were there and they were insistent: “You NEED to get them out of here. They need to survive. This is our hope”. 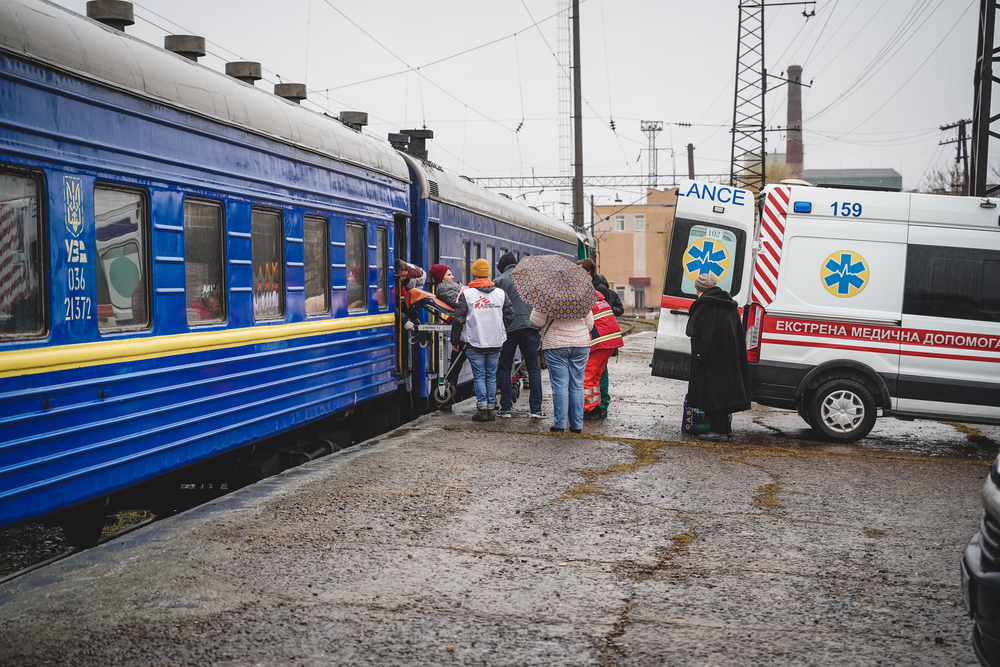 The next day, we came back, three of us, and we screened every single patient. Our key point was to consider for each patient – could this person sustain a 20-hours transfer where we don’t have ICU [Intensive Care Unit] level of care on this first short version of the medical referral train?

And then Thursday morning we came back early, to do another check on all the patients before doing the referral, to make 100 percent sure they were stable.

There was one patient, a three-year-old child with very severe abdominal injuries, who we thought would not be stable enough for the transfer. At one stage, the mother said: “My child is going to die during the transfer.” I’ve been a practicing paediatrician for the past 30 years, and what I told everyone is that when a mother tells you that, she’s never wrong.

We evaluated this child three times, together with the directors of the hospital. When we came on Thursday morning, the doctors were about to take the child back into the operating theatre, and we all came to the same conclusion; this child was not stable enough for the transfer. This decision took time, but it was a decision we all took together. 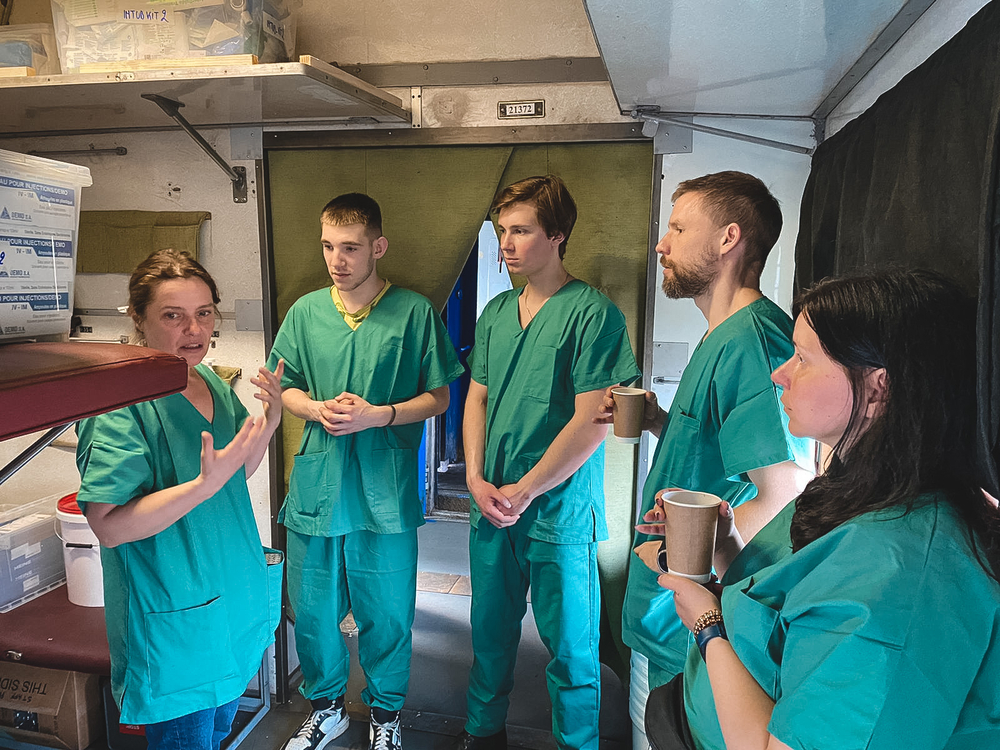 /MSF
Part of the MSF medical team on the train, preparing to admit patients in the town of Zaporizhzhia.

I particularly recall a woman who had a blast injury in her face and had lost her right eye. We had asked her to send us a picture on Tuesday, as we wanted to assess her condition and we had to leave that evening to get back before curfew. And instead of sending us a picture with the injury, she sent us a picture of herself before the injury. And when we got back to the hospital the next day, the first thing she told us was: “I want to be beautiful again. For my husband. For my child.”

These stories from these few patients – this is the story of many thousands of people.

The other thing that is amazing is the dedication I saw. For example, when we did the transfer to the train on Thursday morning, the ICU physician – not the interns but the senior boss of the ICU – came and did the transfer himself. He paid great attention to the boy with the severe leg injuries. It was him who lifted the stretcher onto the train, and waited there a while to check the patient was fine. And when he was finally satisfied, he looked at me and said: “I think my job is finished now. I hand over to you.”