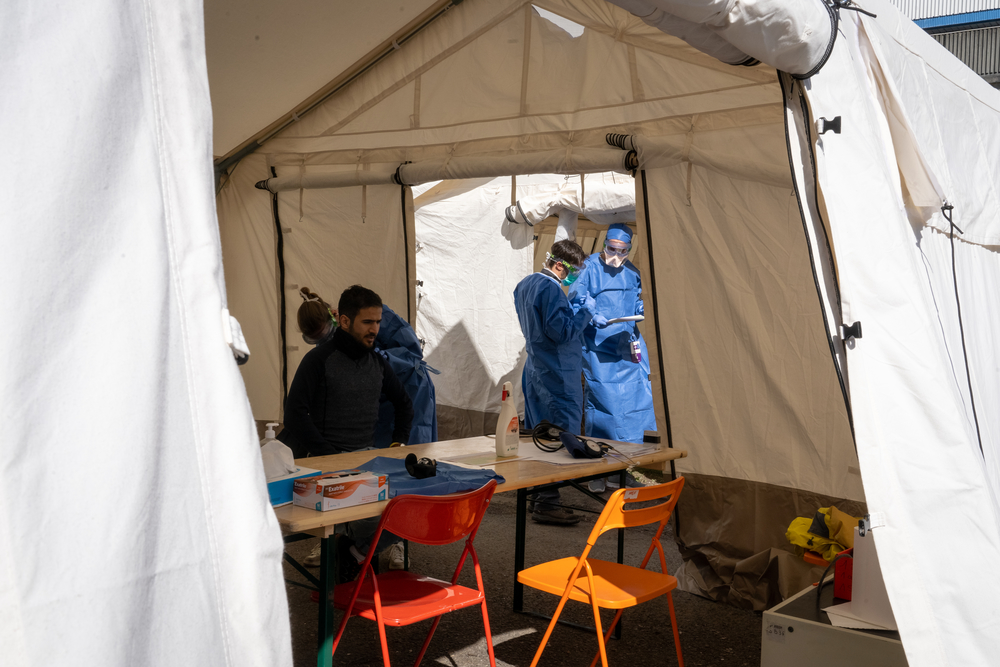 A car drove up to the low, white building that is the Doctors Without Borders/Médecins Sans Frontières (MSF) COVID-19 treatment centre in Aden. In it was a man of around 60 who was coughing and struggling for breath. He managed to heave himself into a wheelchair and then the team took him down to the intensive care unit to start giving him oxygen. Four hours later he was dead.

Such is the speed and savagery of COVID-19 in Aden, a city in the grip of a catastrophic outbreak of the virus. “We have had a lot of people like that,” said Thierry Durand, the project coordinator who set up the treatment centre. “A lot of people that die quickly. They arrive already in a serious condition, and it is too late. People are struggling to understand how they die so quickly.” From April 30 until May 24, the centre admitted 228 patients, 99 of who died. “We only see serious cases,” said Durand. “For us, the healthcare workers, it makes us feel helpless. We can’t do much but give them oxygen. There are days we have had 13 deaths in the same day.”

The centre sees a death rate that is equivalent to ICUs in Europe and the United States, but the difference in Aden is that this is no well-equipped and well-financed hospital with a network of other hospitals and services supporting it. It is a hastily refurbished part of an old cancer hospital on the edge of a city whose healthcare system has collapsed after five years of war and whose inhabitants are plunged frequently into darkness by power cuts.  The centre has been the only centre dedicated to treating COVID-19 until now.

“We are re-using personal protective equipment (PPE) because we don’t have enough,” said Dr Khairil Musa, an Australian ICU specialist working with MSF in Aden. “There is incredibly limited access to testing. We don’t have enough ventilators, we need more oxygen concentrators and a reliable supply chain. Regulators, tubing, masks, all these things we don’t have enough of. It’s an enormous challenge.”

The courtyard of the centre is packed with dense ranks of oxygen cylinders, the 250/a day that the centre needs a stark testament to the struggle of the patients inside to keep breathing. “The simplest way to think about COVID-19 is that the body doesn’t have enough oxygen, and the way to treat it is to give more,” continues Musa. “It sounds simple, but patients require a very, very high level of oxygen.” Severe patients need a huge amount of oxygen per minute and this is posing a massive challenge in terms of supply in Aden. “The oxygen requirements are scary,” said Durand, when asked to describe the difficulties of getting so much oxygen to patients. “There is no centralized oxygen, no liquid oxygen, and here we are in Aden which has a certain level in terms of the availability of resources, in terms of material and personnel. I’ll let you imagine the other places in Yemen.”

“We do rounds to check the patients’ oxygen levels,” explained Musa. “Sometimes patients look fine, then you go round again a moment later and they’re dead. Others are gasping, gasping, and they are the ones that die quickly. They just get tired and stop breathing.”

Such a level of death means that it becomes a problem also to manage the corpses. “We do not have a morgue in the centre,” said Musa. “There is an imam [an Islamic cleric] that comes to collect the corpses and bring them back to the families, but there are not enough people to handle the bodies, so they can be there for a while.” Drone footage taken by journalists elsewhere in the city shows row upon row of graves, freshly dug. Figures from the authorities show that daily burials in the city have increased from a pre-outbreak normal of ten to 80, even 90, in recent weeks.

The team are working nonstop to do all they can for their patients, however. Working to bring more supplies as quickly as possible. Organizing improved oxygen supply. Extending the capacity of the centre to 72 beds. The Yemeni healthcare systems urgently needs more help from the United Nations and other donor states, however, if it is to be able to respond to COVID-19 and avoid further collapse. “The problem is too big to solve on our own,” said Musa.