MSF’s activities in Syria do not include areas controlled by the Islamic State group since no assurances about safety and impartiality have been obtained from their leadership, nor can MSF work in government-controlled areas since MSF’s requests for permission to date have not resulted in access. To ensure independence from political pressures, MSF receives no government funding for its work in Syria.

An outrageous, relentless mass casualty disaster is taking place in East Ghouta, an enclave outside Damascus in Syria. At least 344 wounded and 71 dead every day, seven days a week for two weeks – non-stop.

On March 8, Doctors Without Borders/Médecins Sans Frontières (MSF) released medical data collected from the hospitals and clinics it supports in Syria’s besieged East Ghouta enclave. Covering the first two-week period of the military offensive, the numbers reveal a relentless barrage of mass casualty influxes at a time when medical supplies are extremely limited, medical facilities have been hit by bombs or shells, and the medics are completely exhausted.

In the two weeks between the evening of February 18 to the evening of March 3, 2018, the medical data reveals 4,829 wounded and 1,005 dead – or 344 wounded and 71 dead per day. This data is collected from 10 medical facilities to which MSF provides a full package of support, and a further 10 facilities to which MSF has been providing emergency medical donations from its remaining medical stocks inside the East Ghouta enclave. Two of these facilities have yet to submit data for March 3, so this is an underestimate. There are many other medical facilities in East Ghouta that are not supported by MSF, sothe overall toll is significantly higher.

“The numbers alone speak volumes. But even more telling are the words we hear from the medics we are supporting on the ground,” said Meinie Nicolai, MSF General Director.

“Daily, we hear of an increasing sense of hopelessness and despair, as our medical colleagues reach the limits of what a person can be expected to do. They are exhausted to the point of collapse, grabbing a few moments’ sleep as and when possible, permanently in fear of bombs or shells directly hitting their locations. They are trying their best to keep some semblance of a medical service operating, but everything is overwhelmingly stacked against them. The situation, and the unrelenting trampling of the rules of war by the fighting parties, are pushing them to do the impossible.”

A letter to our colleagues, the doctors of East Ghouta

On March 28, MSF's operations coordinator for Syria, Lorena Bilbao, sent a letter on behalf of the MSF movement to the doctors of East Ghouta, acknowledging the limits of MSF's abilities to be fully present alongside them at the time of their greatest need. "Over a month has passed since the Syrian government and its allies intensified their military offensive in East Ghouta," she wrote. "Over a month of relentless bombing and shelling, on top of five years of intense siege. Week after week, we tried to support you when thousands of wounded and dead were brought to your hospitals; day after day we listened to you when you described your increasing level of exhaustion and despair."

"The war has been going on for over seven years now. During that time, we have continuously tried to access different areas of the country where medical and humanitarian aid might be needed. We have done that regardless of who controlled the region where our help was needed. But, in spite of repeated attempts, we have failed to assist people in government-held areas. Since May 2011, MSF has reached out to the Syrian government to request permission to access these areas, and we continue to do so now, but so far we have simply not been allowed."

MSF reserve stocks of medical supplies in East Ghouta are being distributed amid the almost ceaseless bombing and shelling, but these supplies are being rapidly consumed by the supported facilities and some key items, particularly for surgery, have run out. An official aid convoy that was granted access to the northern part of the enclave on Monday had medical items removed by the government of Syria, according the UN, which was co-managing the convoy. The need for a massive medical re-supply, without life-saving items being removed, is increasingly urgent with each passing hour.

Of the 20 hospitals and clinics MSF is supporting,  15 have been hit by bombing or shelling, with varying degrees of damage. This further reduces their capacity to provide care. Four of the medics MSF supports have been killed and 20  wounded.

The medical needs go beyond war-wounded patients. In most neighbourhoods of East Ghouta, the majority of residents are living in basements and makeshift underground shelters, in unsanitary conditions with limited safe drinking water and often no hygiene or sanitation facilities. Before the enclave-wide military offensive started on February 18, MSF had already been boosting assistance to a field hospital in the Harasta neighbourhood, where bombing and shelling have been intense since November 2017 and some 70 per cent of the population were already living underground. The medical data from that neighbourhood showed clear increases in respiratory infections, diarrheal diseases and skin infections, with many of these patients being children. 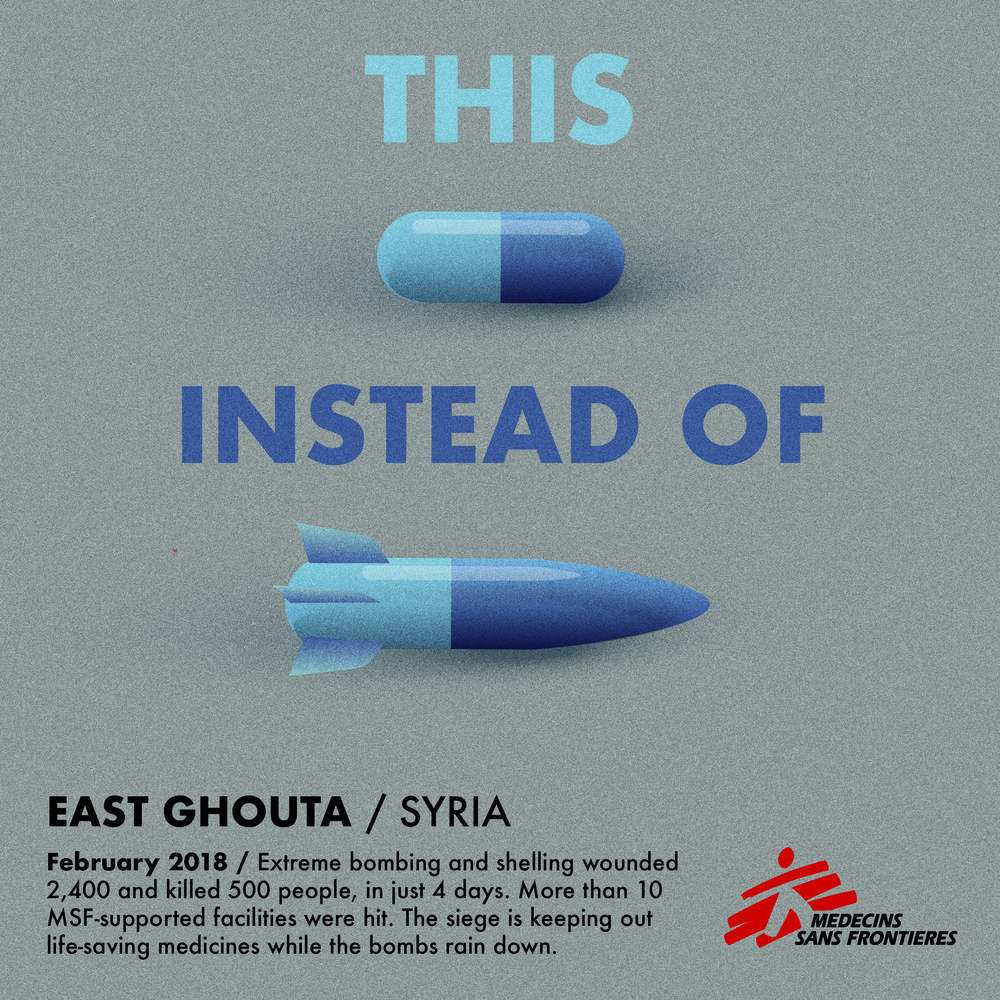 MSF
February 2018 / Extreme bombing and shelling wounded 2,400 and killed 500 people, in just 4 days. More than 10 MSF-supported facilities were hit. The siege is keeping out life-saving medicines while the bombs rain down.

In accordance with basic rules of International Humanitarian Law, MSF reiterates its urgent call to all the fighting parties and their supporters:

•pause the bombing and shelling to allow a reorganization of the medical response;

•ensure that before, during and after any pause in fighting,civilian areas and infrastructure on both sides, including medical facilities, are not hit;

•allow the unobstructed resupply of life-saving medicines and medical supplies, without life-saving items being removed from aid convoys;

•allow medical evacuation of the most critical patients; and

Casualty numbers in Syria’s besieged East Ghouta enclave are soaring beyond imagination as the capacity to provide healthcare is in its final throes, says Doctors Without Borders/Médecins Sans Frontières (MSF).

Hospitals and clinics supported by MSF had seen more than 2,500 wounded and more than 520 dead after just five days of intense bombing and shelling – from the evening of Sunday, February 18 to the evening of Friday, February 23. This is certainly an under-estimate: the number of facilities who managed to report is decreasing, and many facilities in the area that MSF does not support have also received wounded and dead. Many of these are women and children. As of February 23, women and children represented 58 percent of the wounded and 48 percent of the deceased recorded by the nine MSF-supported supported facilities that managed to report.

Over the same period, 13 medical facilities, fully or partially supported by MSF, have been hit by bombs or shells. Medics in East Ghouta who were already pushed to the brink have been working now for several days straight, without a break, with no realistic hope of being able to adequately treat their patients in such extreme circumstances. MSF calls for an immediate ceasefire to enable the basic human act of helping the sick and wounded.

"As a nurse who has worked through extremely grim conflicts, I am devastated to hear doctors and nurses in East Ghouta saying they have 100 wounded patients and no hospital because it has just been reduced to rubble by bombing,” says MSF general director Meinie Nicolai. "There is a level of desperation and exhaustion that comes from working round the clock, finding no time to sleep, no time to eat, permanently surrounded by bombing, and simply being in the middle of absolute distress. Adrenaline can only keep you going for so long. If doctors and nurses collapse, humanity collapses. We must be determined to not let that happen.”

On the third day of this offensive, the medics that MSF supports were calling for increased medical supplies. Now, after six days of incessant bombardment, they are saying that even with supplies they would have no physical capacity left to keep treating the wounded, and they call for something else – for the bombing to just stop.

As the war in Syria has increased in intensity, the frequent calls by MSF and others to respect International Humanitarian Law (IHL) – the rules of war – have demonstrably fallen on deaf ears. We will not abandon our calls for IHL to be respected, but we add now a specific plea: for the medics to be able to do their job. The shelling and bombing by the Government of Syria and the armed opposition groups in East Ghouta must pause immediately, and we call on the supporters of these belligerents to use their influence to alleviate this extreme situation. With high numbers of medical facilities hit and damaged or destroyed, with roads for transferring patients either impassable because of bomb-rubble or from fear of bombing, with medical supplies limited or entirely lacking, and with extraordinary numbers of patients and extraordinarily exhausted medics, a humanitarian response is urgently required. MSF insists the following should be included in the response:

We call individually on the member states of the UN that are militarily engaged in Syria or are supporting warring parties in Syria to acknowledge their complicity in the unfolding medical catastrophe and to urgently exert their influence to alleviate this crisis.

At the start of the recent escalation in fighting, MSF was providing a full package of regular support to 10 health facilities in East Ghouta, and had been increasingly active in supplying other facilities with emergency medical donations. Even facilities that had not asked for MSF support for years were asking for help, and MSF was providing emergency donations to most hospitals and clinics in the area from its fast-depleting stocks in the area, but unable to supply some key items for surgery that were simply unavailable to anyone in East Ghouta. No MSF staff members are present in supported facilities.

Elsewhere, MSF directly operates five health facilities and three mobile clinic teams in northern Syria and has partnerships with five facilities. MSF also provides distance support to about 50 health facilities in areas of Syria where teams cannot be directly present, including in East Ghouta. Some of these are regularly supported and others receive emergency medical donations at times of dire need.

MSF's activities in Syria do not include areas controlled by the Islamic State group, since no assurances about safety and impartiality have been obtained from their leadership, nor can MSF work in government-controlled areas since MSF's requests for permission to date have not resulted in any access. To ensure independence from political pressures, MSF receives no government funding for its work in Syria.