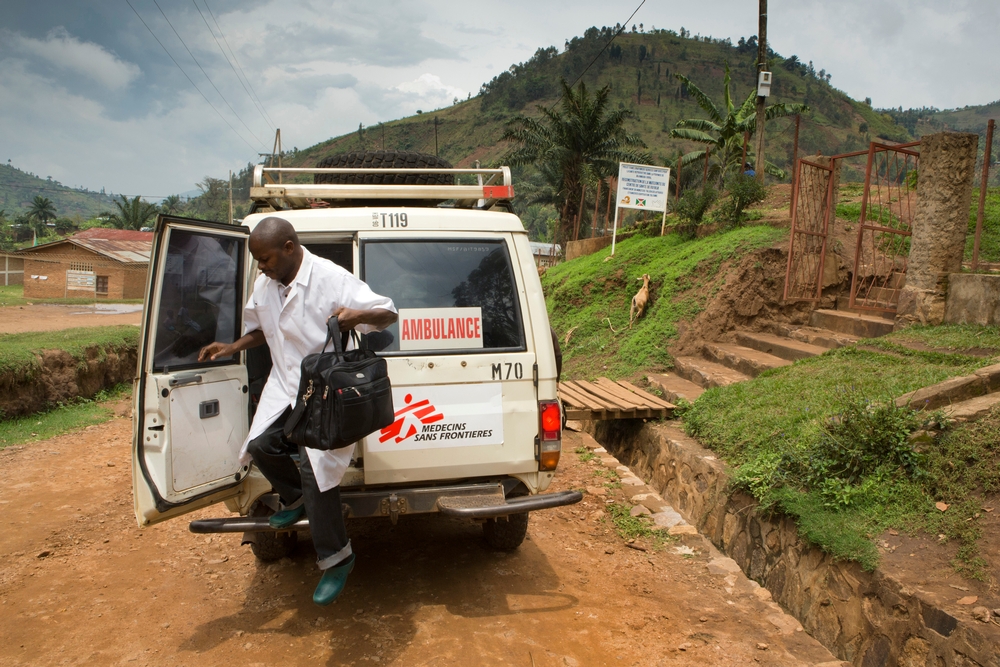 Suitable for all ages

Sit back, relax close your eyes and imagine that your house is being attacked and you have to run… (2.50 minutes)

PULSE is a video series that takes an up-close look at our work delivering medical care on the front lines of humanitarian emergencies around the world. The videos explain complex humanitarian issues in an accessible way that is suitable for students.

Mamadee, the boy who tricked Ebola

In 2014, the Talented Young Brothers (TYB), a group of young Liberian musicians, worked with MSF to create an Ebola awareness song, 'Ebola is Real'. The group took part in health promotion visits to communities, sharing messages on how to prevent Ebola and the number to call if someone gets sick.

A day on the frontline

Vincent is a young nurse from Hong Kong, who fulfilled his dream by working in a Doctors Without Borders hospital in Yambio, South Sudan, in 2012.

Waël - the boy who wanted to walk again

A six-part series about Waël, an Iraqi boy on Doctors Without Borders’ reconstructive surgery program in Amman, Jordan. A journalist follows Waël throughout his seven months of treatment - his first meeting with the medical teams, his operations, his anxiety, his rest periods, the physiotherapy, the strain, his courage, his friendships - right through to his walking again with the use of prostheses.

Situated in the heart of downtown Cape Town, South Africa, Doctors Without Borders has teamed up with the “Zip Zap Circus” and the ‘Cirque du Soleil” to bring joy to children who are HIV positive. Zip Zap Circus is a diverse family committed to teaching the invaluable live skills of trust, honesty, responsibility, teamwork and discipline, giving the children the chance to overcome their illness, rekindle their self-confidence and inspire them to see that HIV is not a death sentence. (5 minutes)

A group of HIV-positive women in one of Zimbabwe’s poorest townships decide to form a football team and enter a local tournament. Barely able to aim a ball at the net, at first, they are laughed at and told they will never make it. But they refuse to give up, determined to show the world that they are no different from anyone else, in spite of their HIV status. (38 minutes)

The risks of vilma on the migrant  route

Vilma and her three daughters flee the violence of Honduras to make one of the most dangerous trips that Central American migrants make in search of a better life. It is estimated that more than half a million people cross Mexico to the United States every year. On their path, the family faces sexual attacks, kidnapping attempts and accidents of a journey that seems not to end, even when they reach the northern border.

The Reach of War: A Day in the Life of the Syrian Conflict

In late 2013, MSF sent teams to MSF projects in Iraq, Lebanon, and Jordan on the same day to record the work we are doing with Syrians, to experience the situation through the eyes of staff members trying to provide desperately needed assistance. The goal was to chronicle "a day in the life" of this brutal, relentless conflict. http://reachofwar.msf.org/

Directed by Peter Casaer and narrated by Daniel Day-Lewis, this documentary provides a harrowing look at the challenges of delivering humanitarian aid in armed conflicts. "Access to the Danger Zone" explores the strategies that Doctors Without Borders uses to save lives in the world's worst war zones, including Afghanistan, Somalia and eastern Democratic Republic of Congo. (52 minutes)

Moving accounts of atrocities and humanitarian crises since the founding of Doctors Without Borders/Médecins Sans Frontières (MSF) in 1971, told using original footage with commentary by MSF staff.Staff are shown wrestling with their consciences, struggling with emotional involvement and receiving threats to their personal security.

The film delves into the hows and whys of MSF’s long-term work with HIV/AIDS patients and its Campaign for Access to Essential Medicines. It explores how MSF as an organization seeks to learn from its experiences, overcome constraints, innovate and speak out to uphold humanitarian principles. (52 minutes)

Formerly the president of MSF, Canadian Dr. James Orbinski returns to Africa to reflect upon the medical services he rendered in the face of overwhelming suffering and maddening indifference. While taking stock of the past in this documentary, Orbinski also confronts the challenges of the future, offering a direct, impassioned set of views on the nature of humanitarianism and the urgency required for compassionate action. Not suitable for younger students. (88 minutes)

In the war-zones of Liberia and Congo, four volunteers with Doctors Without Borders struggle to provide emergency medical care under extreme conditions.

Hundreds of thousands of people are on the run, fleeing a war that rages in eastern Democratic Republic of Congo, in the provinces of North and South Kivu. They are frightened. Many are sick or wounded. Others have been harassed or raped, or have had everything they own stolen. The people of the Kivus are in a critical condition. The destiny of everyone in this region is shaped by the war. The story of their struggle to survive needs to be told. (11 minutes)

See What We See

AIDS kills 1.6 million people per year. Open your eyes to the HIV emergency. AIDS is not over yet.

My Life with HIV

Testimonies from 6 people living with HIV in Mozambique, Kenya, and India

Exodus is a multimedia site about large population movements in the 21st century and their protagonists: refugees, displaced people and migrants.

In 2010, Doctors Without Borders and VII Photo Agency launched "Starved for Attention," an international multimedia campaign to rewrite the story of childhood malnutrition.