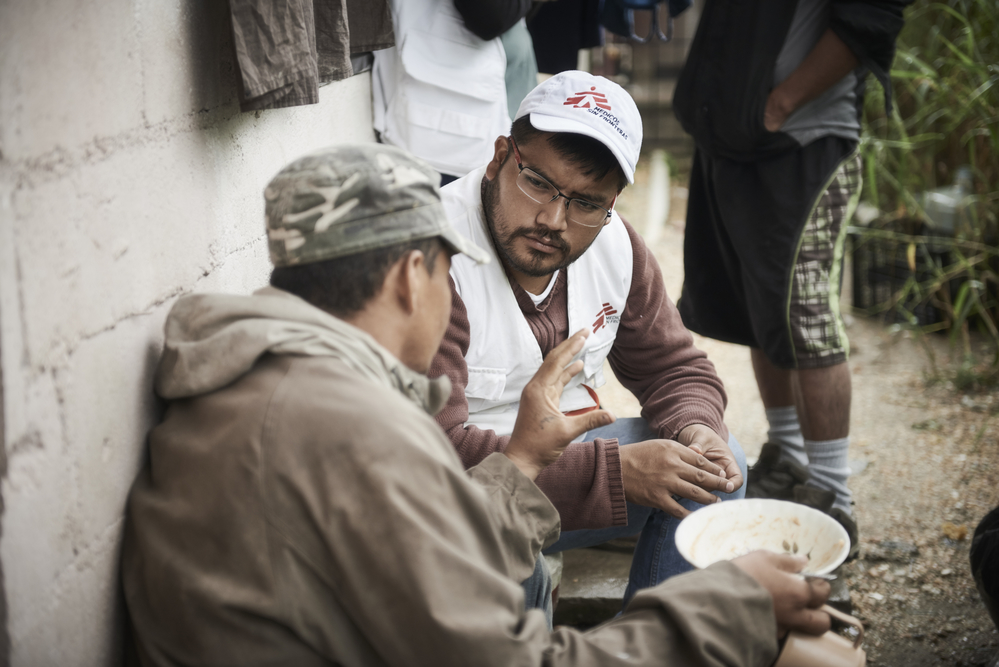 War zones: Violence in Central America is similar to what MSF sees in global conflict areas

Violence in El Salvador, Guatemala and Honduras is at levels similar to those in the global conflict areas where Doctors Without Borders/Médecins Sans Frontières (MSF) has worked for decades; the people it has displaced are in need of essential humanitarian care.

From the Summer 2019 issue of Dispatches, the MSF Canada magazine.

Every year, an estimated 500,000 people flee extreme violence and poverty in El Salvador, Guatemala and Honduras, and head north through Mexico to find safety. The high levels of violence in the region, known as the Northern Triangle of Central America, are comparable to those in the international war zones where MSF has worked for decades.

Gang-related murders, kidnappings, extortion and sexual violence are daily facts of life. “In my country, killing is ordinary — it is as easy as killing an insect with your shoe,” said one man from Honduras, who was threatened by gangs for refusing their demand for protection money, and later shot three times.

Central Americans fleeing violence often face more of the same along the migration route through Mexico. Since January 2013, MSF teams have been providing medical and mental health care to the migrants and refugees who travel these routes. We have provided more than 33,000 consultations at mobile health clinics, migrant centres and local hostels (albergues). Many of our patients need mental-health support due to the significant stresses related to conditions in their home countries as well as to being on the run. Treatment for women often includes medical and psychosocial care for survivors of sexual violence. Teams provide primary care, as well as treatment for acute and chronic diseases whenever possible.

MSF’s direct experience on the ground points to a broader humanitarian crisis in Central America. Despite the catastrophic conditions in the region, people from the Northern Triangle are often considered to be economic migrants in Mexico, the United States and Canada, and they are more likely to face detention and deportation than protection and support. MSF has called on these countries to provide humane treatment to all refugees, asylum-seekers and migrants, and to prevent deportations of vulnerable people back to a dangerous region.

“No mas muertes” reads the graffiti scrawled in green spray-paint on the concrete median of Suyapa boulevard in downtown Tegucigalpa, the capital of Honduras — “no more deaths.” In recent years, pervasive violence in Honduras, Guatemala and El Salvador have triggered a displacement crisis.

The three nations of the Northern Triangle have long been burdened by deep social inequality, political instability and conflict. Now these countries are also contending with the rapid expansion of transnational organized crime, which has exploded over the past decade. Across El Salvador, Guatemala and Honduras, drug and human trafficking by criminal groups known as maras, coupled with widespread corruption and weak law enforcement, have resulted in an environment where civilians face the ever-present threat of violence.

The approximately half a million people who people flee the countries of the Northern Triangle annually are displaced by threats, extortion, forced gang recruitment and homicide rates that rival those in countries at war. Many have no choice but to undertake a hazardous journey north, risking serious injuries and even death along the way.

The physical and mental health consequences of this unfolding disaster have gone largely unnoticed by the international community. In response, MSF, long active in the region, is scaling up activities to provide medical and psychosocial care, running projects at hospitals and clinics and in migrant shelters along the routes north. Teams are also working to adapt the services on offer to better serve growing numbers of people on the move.

Read more from the Summer 2019 issue of Dispatches, the MSF Canada magazine