On August 4, 2020, a powerful blast ripped through the port warehouses near central Beirut in Lebanon, after highly explosive material that was being stored there ignited. More than a hundred people were killed and nearly 5,000 thousand were injured. Two days later the death toll is still growing as more bodies are found under the rubble. The blast generated seismic shockwaves that shook the ground, shattered windows and smashed buildings across the Lebanese capital. It was the most powerful explosion in years in Beirut, a city already reeling from economic crisis and a surge in COVID-19 infections.

“The situation in Lebanon was already critical before the explosion”, explains Emmanuel Massart, Doctors Without Borders/Médecins Sans Frontières (MSF)’s Coordinator of Operations. “The number of COVID-19 cases was on the rise in the past weeks and some hospitals were starting to become overwhelmed dealing with these patients. More people were also struggling to access healthcare because of the economic crisis. The blast transformed what was already a very difficult situation into chaos in just a few seconds.”

In the hours following the explosion, according to the Minister of Health, thousands of injured people poured into those hospitals that were still functioning. Most where quickly overwhelmed with the flow of patients and started to run low on supplies. Other health structures closer to the port had been completely destroyed, and several others were so severely damaged that they had to close and transfer all patients elsewhere. The treatment of severe and critical cases – such as head injuries and chest injuries – was prioritized by hospitals and ambulance services on the first night. Since then, thousands of other patients have been treated for less severe injuries such as cuts caused by glass from shattered windows. 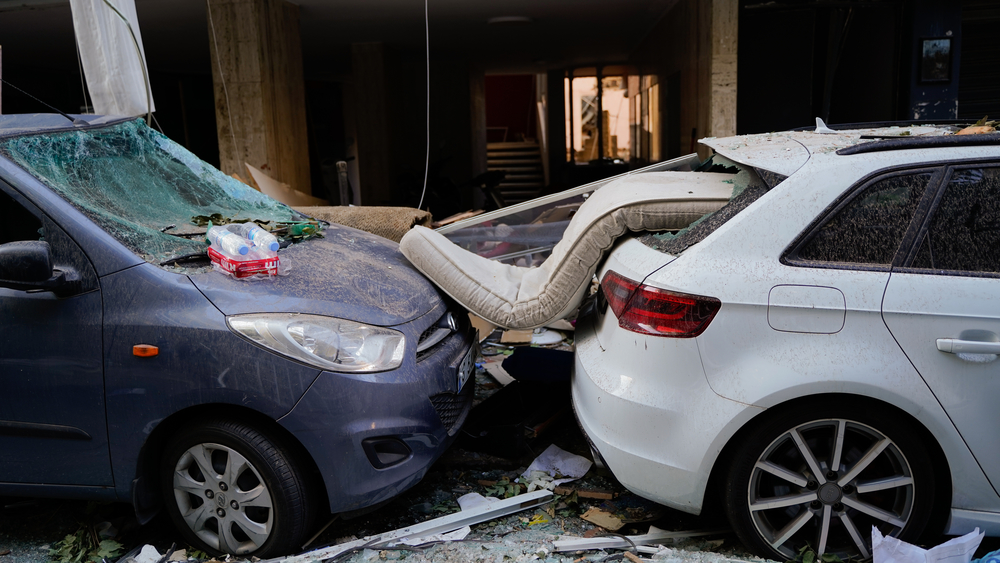 Damaged cars in Beirut, thousands of cars, apartments and shops in Beirut were damaged due to the explosion which caused shattering to the glass windows and wooden doors. Beirut's streets were covered by debris and broken glass.

“Some of our colleagues went spontaneously to health facilities to see how they could lend a hand to the medics dealing with the emergency”, explains Jonathan Whittall, Coordinator of MSF’s Emergency Response in Beirut. “We also donated first aid dressing kits to the Civil Defense in the immediate aftermath”. Since then, MSF has been organizing additional donations of medical supplies to support those tending to the high number of injured and is assessing whether it can set up a mobile team to support the existing medical and civil society services providing care. There are an overwhelming number of people with superficial injuries who are still struggling to access treatment.

MSF teams are continuing to assess the needs of hospitals and emergencies services and are seeking further opportunities to provide support to the medical system in Lebanon in collaboration with the Ministry of Public Health and others health actors. We are also looking at the needs in communities living in neglected areas of Beirut. Additionally, mental health is a key pillar of MSF’s intervention in Lebanon, and the team is being equipped to provide psychological support to those who need it in the city. MSF’s Bar Elias hospital, in the Beqaa Valley, is also being prepared if needed to welcome patients in need of post-surgical care. “We are continuing to identify additional ways we can help the people of Lebanon in the wake of this tragedy”, says Whittall.

MSF is an international, independent, medical humanitarian organization that delivers emergency aid to people affected by armed conflict, epidemics, natural disasters and exclusion from healthcare in almost 70 countries around the world. MSF offers assistance to people based on need and irrespective of race, religion, gender or political affiliation. MSF began working in Lebanon in 1976 in response to the civil war, sending medical teams to the south of the country and Beirut. This was MSF’s first mission in a warzone. Today, MSF is providing free medical care in various locations with over 600 staff members in Lebanon.