Fighting in Ukraine has killed or injured thousands of people, while more than 5.6 million refugees have fled to neighbouring countries.

Doctors Without Borders/Médecins Sans Frontières (MSF) teams are working to deliver emergency medical assistance to people still in Ukraine, as well as those now seeking safety in neighbouring countries.

The situation is extremely volatile and we have witnessed the devastating impact of the conflict on civilians – some cities are surrounded by military forces, under heavy bombardment and running out of food and water.

Many hospitals are facing dramatic shortages of medical supplies – from surgical tools to drugs for chronic diseases – while the mental health consequences of shock and suffering have been enormous, even in areas spared the brunt of the violence. And, every day, more people face a terrible choice: stay in an unsafe place or flee home into uncertainty.

The information about our response, below, is correct as of June 2, 2022.

MSF medical teams are experts at working in conflict zones and complex humanitarian crises, while our experienced logistics staff and robust supply chains ensure critical supplies reach where they are needed.

- Primary healthcare, including treatment for chronic illnesses, for people in vulnerable situations who've fled their homes and stayed behind in areas with heavy fighting

- Support to Ukrainian medics with supplies and training

- Medical evacuations for patients from overwhelmed hospitals to safer areas

We are working to focus our humanitarian response where people’s needs are greatest and where our emergency medical work can have the most impact.

Can I donate to support MSF's work in Ukraine?

Thanks to the generosity of people like you donating to our general funds, we haven't needed to launch an appeal for our work in Ukraine and surrounding countries.

Please consider giving an unrestricted donation, which will give our medical teams across the world the valuable flexibility to respond as needs arise.

Please visit the following link should you wish to donate to our general funds.

How we spend your money

Our response in Ukraine: In-depth

Our priority in Ukraine is getting Ukrainian medics the medical supplies they need.

We're providing technical support and training on how to manage large numbers of wounded people, and relieving pressure by medically evacuating patients to hospitals in safer parts of the country.

While the focus so far has been on surgery, trauma and intensive care needs driven by the conflict, a worrying situation is also emerging for patients with chronic diseases such as hypertension, diabetes, asthma and heart disease who require key drugs and support. 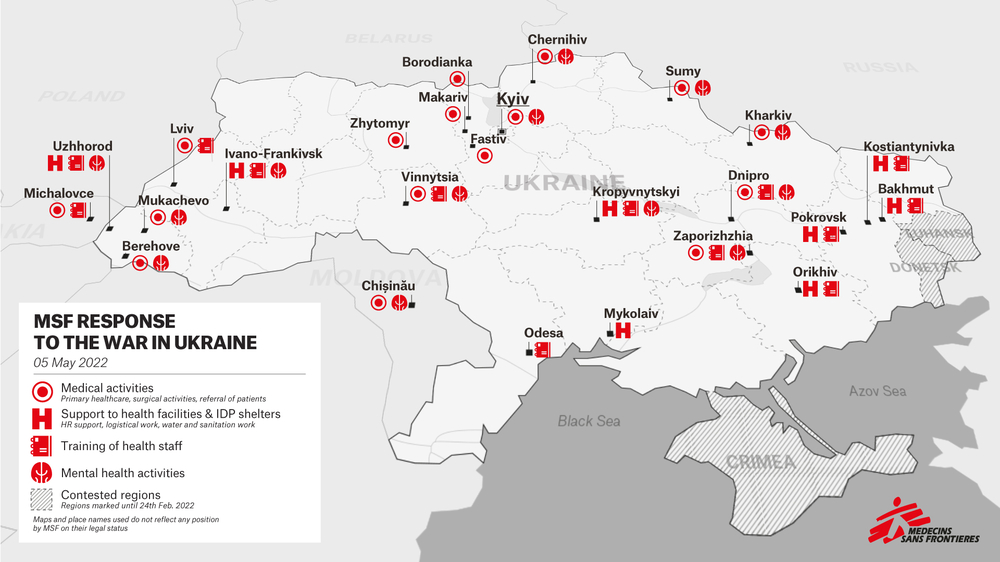 However, with full-scale warfare in many areas, movements are difficult, dangerous or simply impossible. Communication networks are not always available and there is a significant amount of misinformation.

We’re helping ensure people in vulnerable situations with chronic illnesses continue to get the care and medications they need so their conditions don’t get worse.

We're also seeing that people are absolutely shattered by what they’ve been through. Anxiety, panic attacks and trouble sleeping are common symptoms.

We have increased our focus on mental health activities, including strengthening the capacity of Ukrainian psychologists and training first responders to administer psychological first aid.

To date, 420 patients have been evacuated. On April 11, the team evacuated 78 babies and toddlers from an orphanage in Zaporizhzhia, some of whom had been injured by the widely reported missile strike on Kramatorsk train station.

Since the conflict began, MSF has transported medical supplies to treat war-wounded people arriving at hospitals in Kyiv, including specialized mass casualty kits for dealing with incidents where large numbers of injured patients arrive at the same time.

MSF teams have also conducted mass casualty training with staff at several Kyiv hospitals, while an expert surgical team carried out hands-on war-surgery training at a pediatric hospital. We are also supporting healthcare centres in the wider Kyiv area in the treatment of patients with chronic diseases and other non-trauma needs.

Most recently, we launched a project providing primary healthcare and mental health care to people in Hostomel, near Bucha and Kyiv, which was occupied for 35 days.

In Bilal Tserkva and Fastiv, our teams are focusing on elderly and displaced people suffering from chronic diseases who may have been cut off from healthcare. This involves donations, as well as medical and mental health support, while training will be carried out with staff at healthcare facilities.

Since April 5, around 60 medical consultations have been carried out with elderly people living in the area.

The focus in Zhytomyr is gradually returning to resuming our former activities supporting the treatment of drug-resistant tuberculosis.

In and around Zhytomyr, we donated trauma-related supplies and conducted mass casualty training in nine hospitals during the phase when frontlines of fighting were close.

We are running mobile clinics in 10 neighbouring villages around Chernihiv to respond to health needs. We are providing outpatient consultations for non-communicable diseases as well as mental health support and identifying cases of sexual and gender-based violence. We are also reaching patients in Chernihiv with our sexual and gender-based violence hotline, located in Kyiv.

In Kharkiv, we are running mobile clinics for thousands of people sheltering in subway stations (more than half the total stations in the city), many of whom are suffering stress and psychological trauma due to the war. More than 1,000 consultations have been performed. We have also installed water filters to secure clean water.

In the city of Lviv, expert teams have been training hospital staff to deal with mass casualty events and to treat war wounds.

We also have a surgical team working to support the burns unit of one of the big referral hospitals in Lviv.

In Vinnytsia, our teams are working with local hospitals to prepare for mass casualty events and have made donations to healthcare facilities across the region. We are also exploring how to provide support for water and sanitation needs.

Mental health support has begun in Nemyriv district, with a focus on destigmatization and psychological support in an environment that previously relied on medication and institutions. We are also planning physiotherapy care for patients who are war-wounded.

A team is running mobile clinics along the border with Hungary, where there are significant numbers of people gathered, centred for the moment on Berehove.

The team is seeing signs that mental health support is becoming a priority. We will focus in this direction, and also on the continuity of care for patients who were previously following medical treatment that risks being interrupted by their rapid departure to a place of safety.

We have established bases in Uzhhorod and Ivano-Frankivsk and are building a network for transporting supplies to hospitals in frontline areas. We are also assessing nearby healthcare needs and will be carrying out chemical, biological, radiological and nuclear training with local healthcare teams. 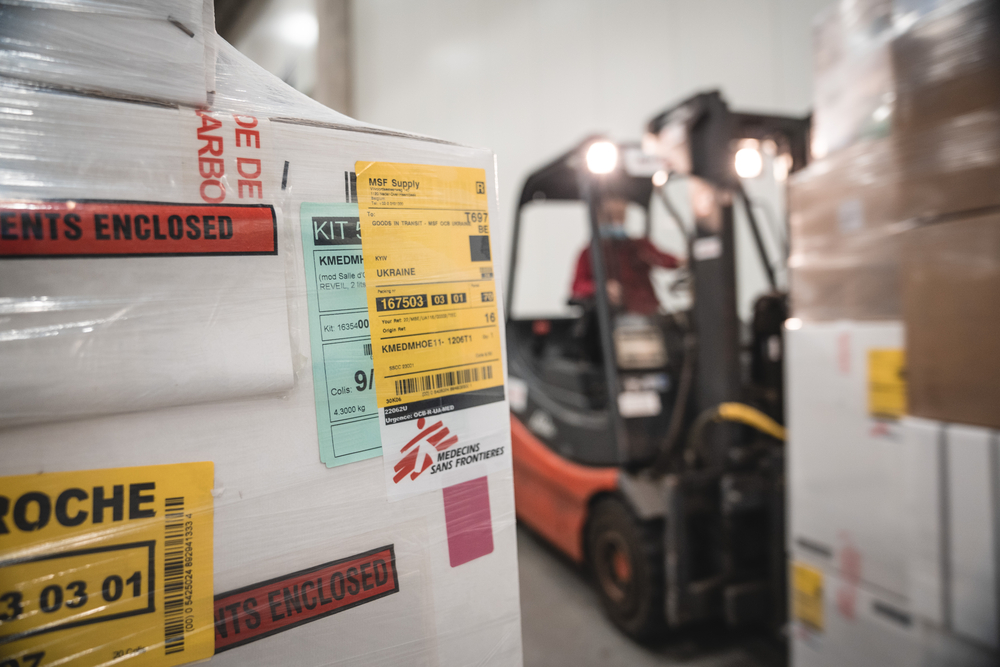 To help Ukrainian health facilities cope with a potential influx of injured people, MSF teams have trained hundreds of medical doctors and nurses to triage patients according to the severity of their injuries.

This step is essential to ensure that patients are treated appropriately in an emergency situation.

In Odesa and Mykolaiv, we were able to donate medical supplies to hospitals preparing to accept wounded. Consultations for displaced and people in vulnerable situations will be provided soon.

In Mykolaiv, MSF is also funding the work of local volunteers who bring medical and logistic equipment in and out of the besieged city.

We have expanded our work in eastern Ukraine in response to the growing needs in areas close to the frontline and in places hosting people who have fled their homes.

In and around Dnipro, we are supporting people in vulnerable situations who have fled parts of Donetsk and Luhansk where the conflict is particularly intense, and who are now staying temporarily or longer-term in dozens of shelters.

Many are at-risk, including the elderly, people with disabilities, unaccompanied children and people who cannot afford to make the journey further west in Ukraine or abroad.

MSF has started providing psychological first aid to people arriving from Mariupol in reception areas and shelters. We have also donated medical supplies and carried out mass casualty training for staff at the main hospital in Zaporizhzhia.

We are working with health facilities close to the frontline in Donetsk to make sure they have enough of the right supplies and training to be able to keep treating patients if they get cut off from supply lines by intense fighting.

For some facilities we are also providing logistical support to ensure an autonomous supply of electricity through generators and solar power, and clean water to continue functioning for up to a week.

The hospitals that we have visited in the Dontesk and Luhansk regions all have surgical capacity but at varying levels. We have a team based in Pokrovsk to provide guidance, coaching and ongoing training for hospitals to improve and expand their surgical capacity. We have also started an ambulance referral service to medically evacuate patients from hospitals that are closer to areas of active warfare in the east.

Our emergency response in neighbouring countries

MSF is committed to providing medical assistance to people affected by the conflict no matter where or who they are.

MSF
Medical mobile units have been sent inside Ukraine by MSF to provide medical assistance to people who are trying to cross in Poland to flee the war in their country - Polish-Ukrainian border, March 09, 2022

MSF emergency teams are operating from bases in Poland to bring essential medical staff and supplies into Ukraine.

According to the United Nations, more than three million people have fled from Ukraine into Poland alone. In the first few days of the response, we donated supplies to the Red Cross Lublin and a reception point in Horodlo, and we intend to start providing psychological first aid, self-care and counselling training to volunteers helping with the response.

The UN reports that around 530,000 refugees have crossed into Hungary. However, our assessments have found that the immediate needs of many people are being met.

We have now started working in partnership with local organizations to provide primary healthcare consultations and psychological support. Meanwhile, we will continue to monitor the situation, focusing on identifying less visible needs of individuals and groups that are in vulnerable situations that are missing out on essential services.

As of May 3, nearly 500,00 people have crossed into Moldova from Ukraine. Although many people appear to be in transit, Moldova – which has a population of only 2.6 million people – now hosts the largest concentration of Ukrainian refugees per capita, according to the UN.

On March 12 in Palanca, MSF started providing primary healthcare consultations and psychological first aid sessions for people fleeing from Mykolaiv and Odesa. Our teams have also provided mental health support to people at reception centres in the capital Chișinău and are undertaking assessments at hospitals across the city to understand the medical needs.