Six years into the war in Syria, civilians continue to suffer as a result of a brutal conflict that has precipitated a complex humanitarian crisis, with ever mounting suffering and millions without access to basic healthcare.

In the face of these colossal needs, Doctors Without Borders/Médecins Sans Frontières (MSF) reiterates its call to warring groups to allow access to Syria, in order to provide medical assistance to the victims of war.

“All parties to the conflict, neighbouring countries and international actors must allow access for humanitarian aid and not use it as a political tool,” said Pablo Marco, Middle East Operations Manager for MSF. “They must also allow those in need of medical assistance into areas where they can access specialized medical treatment and enable medical staff to access them, while ensuring the protection of first-responders, medical staff and facilities.”

The war, coupled with attacks on medical personnel and facilities, has dramatically weakened Syria’s previously well-functioning healthcare system — this at a time where there has been a significant surge in medical needs as a result of the conflict, placing tremendous pressure on the remaining healthcare infrastructure. MSF teams are currently operating in several Syrian governorates to provide lifesaving care; however, the government of Syria has still not granted authorization for MSF to work in the territories it holds, despite repeated requests. MSF also does not have a presence in areas under the control of the Islamic State group for lack of credible assurances to protect the safety of our staff. 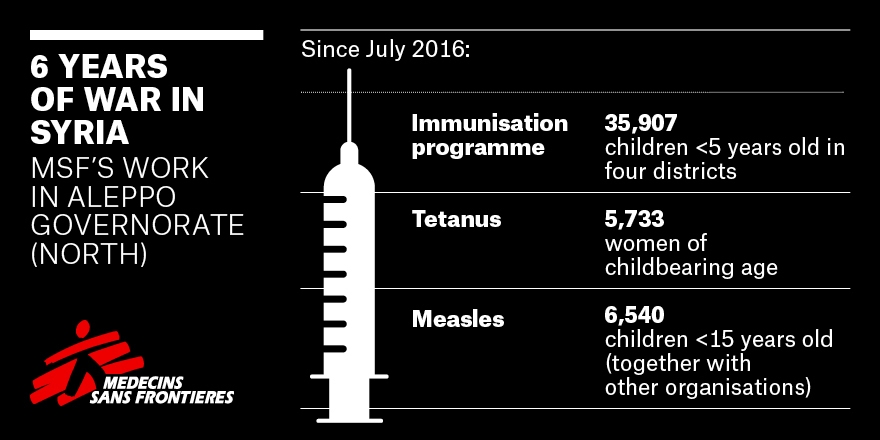 “All this puts large areas out of reach for MSF for the moment,” Marco said. “While MSF will continue its efforts to work across all Syrian territories, we call for space for independent impartial care in Syria and for aid groups to be allowed to conduct concrete humanitarian and medical response in areas of need,” Marco continued.

Turkey, Iraq, Jordan and Lebanon have made immense efforts to help Syrian refugees, hosting almost 4.8 million Syrians. However, hundreds of thousands continue to seek refuge abroad. MSF calls on Syria’s neighbours to allow the cross border evacuation of not only vulnerable cases, critical cases, and the severely ill and wounded, but also for all those seeking refuge in the spirit of the Refugee Convention, Marco said.

“The rest of the world cannot turn its back on thousands of people who have fled war and persecution. Respecting peoples' right to seek asylum and to obtain proper assistance and protection is fundamental,” Marco added.

As the conflict enters its seventh year, Syria remains one of the most complex and volatile humanitarian crises in the world today. In the war-torn country, the International Humanitarian Law (IHL) governing conflicts has been entirely overlooked, leading to an absence of due care from parties to the conflict to avoid civilian casualties. “Warring parties in Syria must take steps to protect the civilian population and civilian infrastructure as per IHL in zones of battles,” Marco said. “Those infringements to IHL are  unacceptable,” he added. A doctor stitches the ear of a man injured in airstrikes on Bab Al Nayrab district, east Aleppo.

Despite the extent of the crisis and people's needs, MSF is significantly constrained in its presence and medical activities in Syria, mainly due to insecurity but also due to a lack of agreements and authorizations. These constraints are as present today as they were a year and a half ago. To this date, the Syrian government has not granted us authorization to work in the country.

MSF nevertheless continues to directly operate six health facilities in the north of Syria, and puts significant energy into providing the best possible support to more than 150 health facilities countrywide, in areas where MSF cannot be directly present.

After five and a half years of intense conflict, the situation in Syria keeps deteriorating, with ever-increasing unmet needs and suffering. It is estimated that 4.8 million people have fled the country, and another 6.5 million people are internally displaced (source: OCHA). This represents nearly 50 per cent of the total population.

The humanitarian system is failing in Syria. Assistance, including access to food and medical supplies, remains appallingly insufficient. The pervasive daily reality for many people in Syria is one of fear, deprivation, and a struggle to survive. Through many parts of the country access to medical care is dire due to a crumbling health system. Many hospitals are facing critical supply shortages, and there are ever-diminishing numbers of health workers, as medics have fled or been killed.  From the beginning of the conflict medical staff and medical facilities have been targeted.

Aleppo is in an exceptionally critical situation at the moment. In east Aleppo city where MSF carries out remote support to medical facilities, an estimated 250,000 people are militarily encircled and a full siege is in operation, starving the population of the basics required for survival, such as food, medical supplies, and fuel to pump water and generate electricity. Furthermore, civilian areas and hospitals are being routinely hit in targeted or indiscriminate bombing and shelling. Attacks by opposition groups occur in west Aleppo which is government controlled but we do not have support programmes there due to a lack of authorisation,  hence we do not have any information on the situation other than what is in the media.

Even those people who manage to flee the fractured front lines or besieged areas and reach the border are finding it increasingly difficult or at times impossible to seek refuge abroad. Border restrictions and closures are forcing people to return to the places in Syria they have fled or to camp out in the desert with no facilities or resources, at risk of violence, disease and hunger. This is the case for example in the berm where 75,000 Syrians are stranded between the Syrian and Jordanian borders. The aftermath of an attack on one of the key surgical hospitals in east Aleppo during airstrikes on 17 November 2016. The damage was so extensive that the hospital was forced to go out of service immediately. The hospital had an emergency room, an intensive care unit and a number of operating theatres providing orthopaedic and general surgery.

The bombing of hospitals

Most recently, multiple hospitals were hit by airstrikes from 16 November onwards, one day after airstrikes were relaunched on the opposition-held area of the city. Some hospitals came under attack more than once. Among those hit and taken out of service was a children’s hospital, two key hospitals specializing in surgery and the largest general hospital. The pediatric hospital that was hit was the only specialized hospital for children in the besieged area. Hospital staff managed to move children, including premature babies, from cots and incubators to the basement of the building to shelter from the bombing. Both hospitals that were hit are supported by MSF, among other organisations.

Outside east Aleppo, hospitals supported by MSF have also been hit by bombing or shelling. Recent examples include: Dr. Abu Wasim, a surgeon, stands next to a damaged ward on the upper floors of a hospital in East Aleppo, Syria, after it was hit by an airstrike in mid-October 2016. He is one of seven surgeons left in East Aleppo.