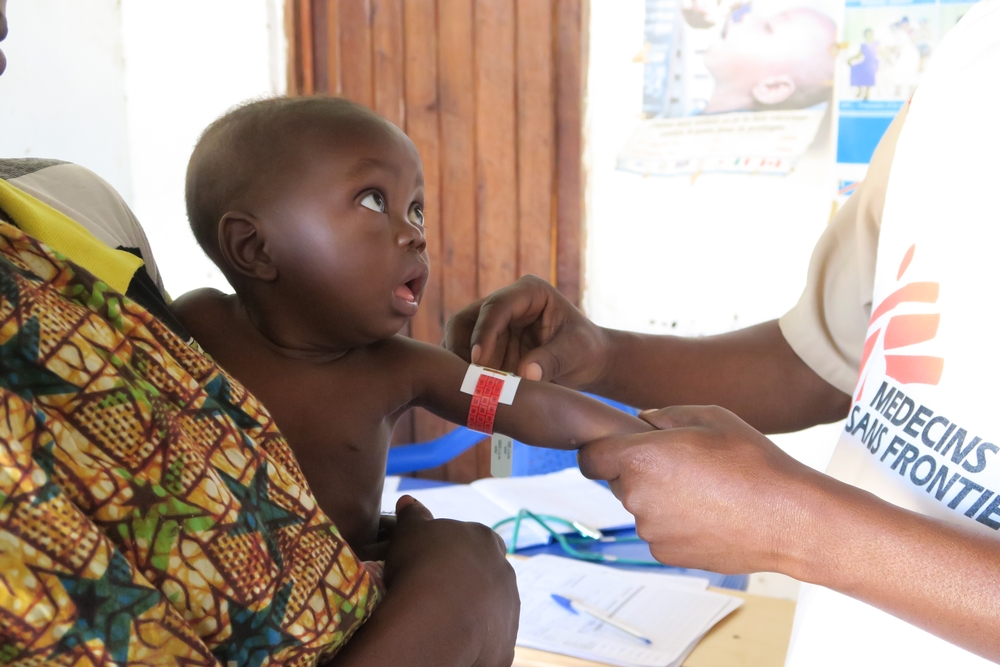 Medical nutrition programs are an important part of Doctors Without Borders/Médecins Sans Frontières (MSF)'s emergency medical care in many of the more than 70 countries around the world in which we operate. This includes emergency interventions in several countries currently facing urgent malnutrition crises, including South Sudan, Nigeria, Yemen and Chad.

When children suffer from acute malnutrition, their immune systems are so impaired that the risk of death is greatly increased. According to the World Health Organization (WHO), malnutrition is the single greatest threat to the world’s public health.

The critical age for malnutrition is from six months—when mothers generally start supplementing breast milk - to 24 months. However, children under five, adolescents, pregnant or breastfeeding women, the elderly, and the chronically ill are also vulnerable.

People become malnourished if they are unable to take in enough or fully utilize the food they eat, due to illnesses such as diarrhea or other longstanding illnesses, such as measles, HIV/AIDS and tuberculosis.

We estimate that only three percent of the 20 million children suffering from severe acute malnutrition receive the lifesaving treatment they need.

Breast milk is the only food a child needs for its first six months. Beyond this point, breastfeeding alone is not sufficient.

Diets at this stage must provide the right blend of high-quality protein, essential fats and carbohydrates, vitamins, and minerals.

In the Sahel, the Horn of Africa, and parts of South Asia, highly nutritious foods such as milk, meats, and fish are severely lacking.

For a child under the age of two, their diet will have a profound impact on their physical and mental development. Malnourished children under the age of five have severely weakened immune systems and are less resistant to common childhood diseases.

This is why a common cold or a bout of diarrhea can kill a malnourished child. Of the seven million deaths of children under five years of age each year, malnutrition contributes to at least one third.

Understandably, the most common sign of malnutrition is weight loss. Loss of weight may also be accompanied by a lack of strength and energy and the inability to undertake routine tasks. Those who are malnourished often develop anemia and therefore exhibit breathlessness and a lack of energy.

In children, signs of malnutrition may include an inability to concentrate or increased irritability, and stunted growth. In cases of severe acute malnutrition, swelling of the stomach, face, and legs, and changes in skin pigmentation may also occur.

Malnutrition is diagnosed by comparing standard weights and heights within a given population, or by the measurement of a child’s mid-upper arm circumference (MUAC).

If dietary deficiencies are persistent, children will stop growing and become ‘stunted’—meaning they have a low height for their age. This is diagnosed as chronic malnutrition.

If they experience weight loss or ‘wasting’ - low weight for one’s height - they are diagnosed as suffering from acute malnutrition.

This occurs when a malnourished person begins to consume his or her own body tissues to obtain needed nutrients.

In the severe acute form, children with kwashiorkor - distended stomachs - can be clinically diagnosed with body swelling, irritability, and changes in skin pigmentation.

We believe that ready-to-use therapeutic food (RUTF) is the most effective way to treat malnutrition. RUTFs include all the nutrients a child needs during its development and helps reverse deficiencies and gain weight. RUTFs don’t require water for preparation, which eliminates the risk of contamination with water-borne diseases.

Because of its packaging, RUTFs can be used in all kinds of settings and can be stored for long periods of time. Unless the patient suffers from severe complications, RUTFs also allow patients to be treated at home.

Where malnutrition is likely to become severe, MSF takes a preventative approach by distributing supplementary RUTF to at-risk children.