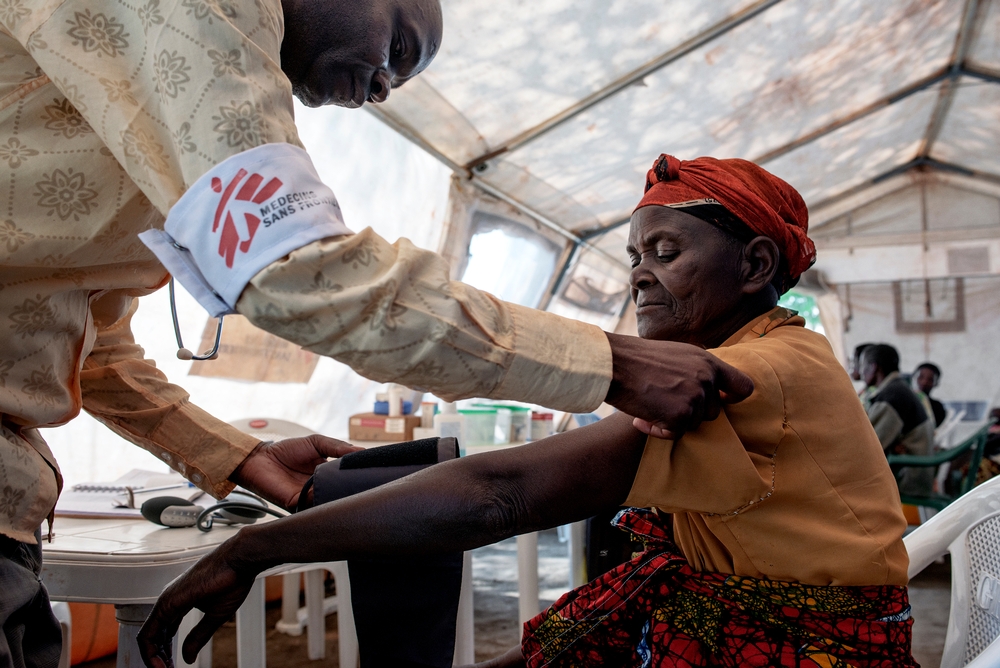 Doctors Without Borders often hits the headlines when an emergency dominates the news, such as an earthquake, tsunami or war. But we constantly deliver humanitarian aid projects, from disaster response to long-term medical programs which stretch over decades.

Our teams see millions of patients every year, whether or not we hit the headlines.

We can respond to emergencies extremely quickly. When a devastating earthquake hit Haiti in 2010 our teams treated the first casualty within minutes.

We already had staff in the country and they immediately helped victims of the disaster, despite damage to all of our medical facilities, as we geared up for a full emergency response.

Even if we are not active in a country we can deploy within hours. Doctors Without Borders has developed pre-packaged disaster kits, including a complete surgical theatre, an obstetrics kit and an inflatable hospital. These kits are now used as models by emergency relief organizations worldwide.

We have logistics centres and warehouses around the globe  where we buy, test and store equipment including Toyota Land Cruisers, communications equipment, power supplies, water-processing facilities and nutritional supplements.

We also store thousands of tents, shelter kits and other non-perishable items. Planes can be loaded and flown into crisis areas within 24 hours.

Permanent emergency teams work in our headquarters. These experts deploy to coordinate our response and assess the needs as soon as a disaster strikes. They then call up experienced staff from a pool. These people can be on the ground within days.

Not everything strikes without warning; some disasters are slow. They unfold over decades as a disease devastates a population, instability undermines the health system or people are actively excluded from care.

Also, after a rapid emergency subsides people can find it difficult to access healthcare as the area struggles to recover, the government is overwhelmed by the scale of the problems or new health problems are sparked, such as cholera outbreaks when clean water supplies are disrupted.

In these cases, Doctors Without Borders works to give people access to health care and to tackle diseases which need long term treatment, such as HIV/AIDS, tuberculosis and neglected tropical diseases like sleeping sickness.

Our teams may provide day-to-day health care for large populations, such as accident and emergency, surgery and management of chronic conditions.

In some cases there is no functioning health care infrastructure and we build or renovate clinics, introduce ambulance services or set up treatment programs.

We have worked in some countries for decades. If we were to withdraw too soon the health care vacuum could create an emergency, forcing us to return. We work with other aid organizations and governments, when appropriate, to improve health care and end the threat of emergency.

They hoped that by bringing abuses to light they could bring them to an end. Acting and speaking, treating and witnessing were the key words used during the creation of Doctors Without Borders. Today, these are still valid. This means we will speak out, either in private or in public, about the plight of populations in danger.

We also advocate for fairer access to medication. The Access Campaign is based in Geneva. They challenge the high cost of existing medicines and the absence of treatment for many of the diseases affecting our patients.

The scope and scale of our work gives us unique access to diseases, data and the reality of delivering care in extreme situations. Doctors Without Borders works hard to improve the way we work and to share the results with others.

For 40 years, Doctors Without Borders has directly witnessed the human cost of the lack of drugs for neglected diseases and has raised its voice against this inequity.

In 2003, seven organizations from around the world joined forces to establish DNDi, Drugs for Neglected Diseases Initiative.

In some situations we set up mobile projects. These teams move around to make sure that as many people as possible benefit from our care. These can be attached to a fixed clinic, heading out for a day or two to visit isolated areas, or they can constantly move from place to place.

A mobile team travelled through the Central African Republic in 2012. Over 18 days in one city they screened 4,534 people for sleeping sickness.

In the week before screening, community health workers, with the help of local authorities, travelled around the area raising awareness of the disease and passing on the message that free testing and treatment was available.