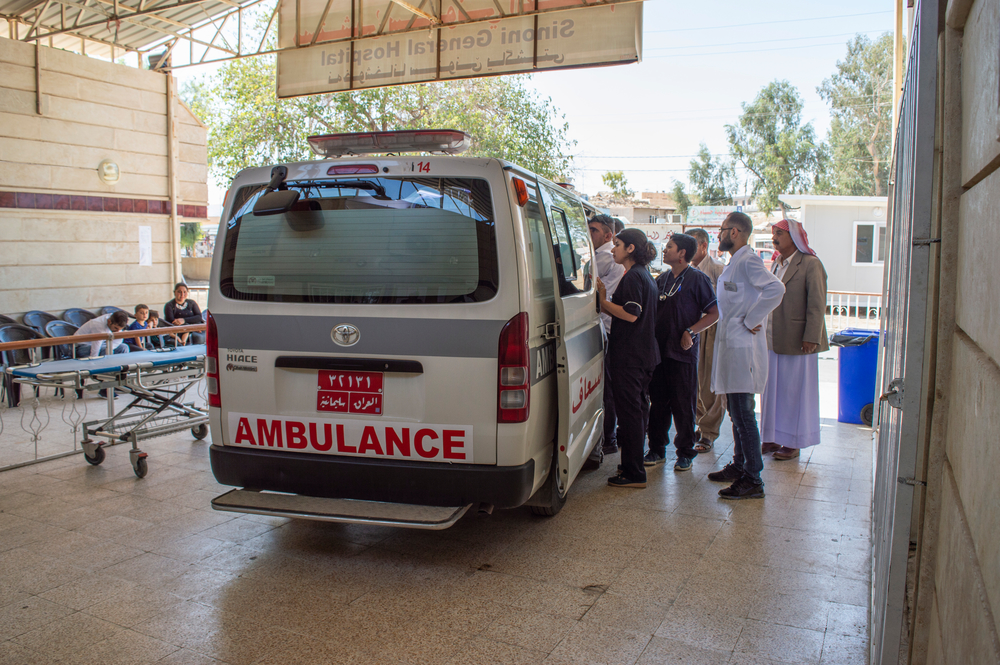 Iraq: From one crisis to another for the Yazidis

The COVID-19 pandemic is having a profound impact on the Yazidi community in Sinjar district in north-west Iraq. Although there are not many cases recorded in the area, the restrictive measures adopted in Iraq (like many other countries worldwide) to curb the spread of the virus are burdening the daily lives and well-being of an already vulnerable community.

In 2014, the Islamic State (IS) group swept through the Sinjar region mounting what Yazidis, a religious minority mainly living in north-west Iraq, refer to as a ‘genocidal’ campaign against them. The IS militants slaughtered thousands of men and abducted an estimated six thousand women and children, either selling them into servitude or forcing them into sexual slavery. More than six years on, and after the city was taken back from IS in 2015, many families have been left with mental and physical scars. Some people are still looking for loved ones who went missing or mourning those who died, and many are fighting to rebuild their livelihoods.

The spread of COVID-19 has brought strict movement restrictions between the cities across Iraq. In Sinjar, these restrictions have immensely affected the economic situation and daily lives of local people, and in turn, their mental well-being. Most people in Sinjar were already living well below the poverty line, with widespread unemployment. Following the arrival of COVID-19, those who once had jobs are forced to stay at home, unable to work and provide for their families.

Aeed Nasir has been working with Doctors Without Borders/Médecins Sans Frontières (MSF) in the Sinuni General Hospital as a nurse supervisor since 2018. Aeed is married with four children and lives in Chamshko camp for internally displaced people (IDPs) in Dohuk governorate. Aeed hasn’t seen his family in five months as he is unable to go back to Dohuk under the current movement restrictions.

Speaking about the situation in Sinjar, Aeed says that “the majority of people in Sinjar are either farmers or do temporary labourer jobs outside the city lasting for one or two days at a time. The coronavirus has stopped all the businesses, and people can’t travel outside the town for work. The farmer’s harvest is not even close to yielding the efforts and money spent on it by the farmer, and merchants from other governorates can’t come to buy the products and take them to the other governorates. Hence the crops and vegetables end up rotten. Before the coronavirus, people had very little income. Now there’s none.”

For many people, losing the ability to provide enough for their family alongside too much free time, uncertainty about what the future might bring, and not being able to visit family members, have caused feelings of frustration and stress. This has especially adverse consequences for people who are already trying to overcome traumatic experiences from their past.

“We have seen an increase in domestic violence; men are sitting at home without work and they are forced to spend a lot more time with the family than they are used to. After the easing of curfews, we received many women who said their spouse had become aggressive towards them and their children. Aggressive behaviour and anger towards family members is a way to channel/vent their frustrations and anxieties,” said Phoebe Yonkeu, MSF’s mental health activity manager in Sinuni. “We have also observed a surge of people suffering from depression in Sinjar, and we believe the lockdown has played a big role in that. Over the last few months, we have received many patients with suicidal thoughts and attempts, which are severe symptoms of depression”.

With the imposed movement restrictions, access to healthcare is another big challenge the people in Sinjar struggle with. Shanna Morris, a doctor with MSF in Sinuni, says, “Before the curfews were imposed, people who needed specialised medical services used to be referred to the hospitals in Duhok governorate in Iraqi Kurdistan. Now, people can’t travel to Dohuk and the only destination available for them is Mosul. To access Mosul for medical needs, they must travel by ambulance so they’re allowed to cross checkpoints. On average, it takes four hours before a patient reaches the hospitals in Mosul. Many Yazidi people also have reservations about going to Mosul either due to the events of 2014, or because many of them don’t speak Arabic and it’s hard for them to communicate.”

For many people living in the villages in Sinjar, the Sinuni General Hospital – where MSF provides emergency and maternity services – is the only option for healthcare services. But fewer women are coming because they are not allowed through the checkpoints to get to the hospital. “Our outpatient department numbers have greatly decreased. Women are not coming for antenatal or postnatal care and family planning because they cannot cross the checkpoints; they are not considered an emergency. After some recent easing of movement restrictions, we received more women with unwanted pregnancies who told us that they ran out of family planning items and medication,” said Adelaide Debrah , a midwife working for MSF in Sinuni.

On top of COVID-19, recent airstrikes in the region and ongoing military campaigns against groups affiliated with the Kurdistan Worker’s Party (PKK) are causing further mental stress and people fear the area will become a warzone again.

“The day the fighter jets bombed the Sinjar mountain, I was in Sinuni. The first rocket terrified me; I didn’t know what was going on. The first thing that came to my mind was that IS was back in Sinjar.” said Aeed, “after some phone calls, I learnt that it was Turkish bombings of PKK-affiliated groups. The house I stay in is very close to one of their bases and out of fear of the base being bombed, I left the house. I wandered around Sinuni and heard women and children screaming. People were carrying their children and trying to move far away from the bases. Now, people have stopped visiting the mountainous areas completely, out of fear of being targeted by warplanes.”

As COVID-19 continues to wreak havoc, many people have lost what little hope they had left.  “The Yazidi people still haven’t forgotten what happened to them in 2014,” Aeed continues. “The consequences of the carnage still dominates the area, with mass graves still being found. I see hopelessness in people’s faces. Some don’t even have enough money to buy food. It happens many times that we – the hospital staff – collect donations ourselves for some patients. There is nothing in Sinjar, even the water is not suitable for drinking sometimes. How do you think people should feel when they have nothing?”

Serving more than 90,000 people, the MSF project in Sinuni is providing health services for all communities in the area. In 2019, MSF treated 14,581 patients in its emergency room in the Sinuni General hospital. The team also assisted 755 deliveries, provided 8,702 sexual and reproductive healthcare consultations and 1,434 mental health consultations.