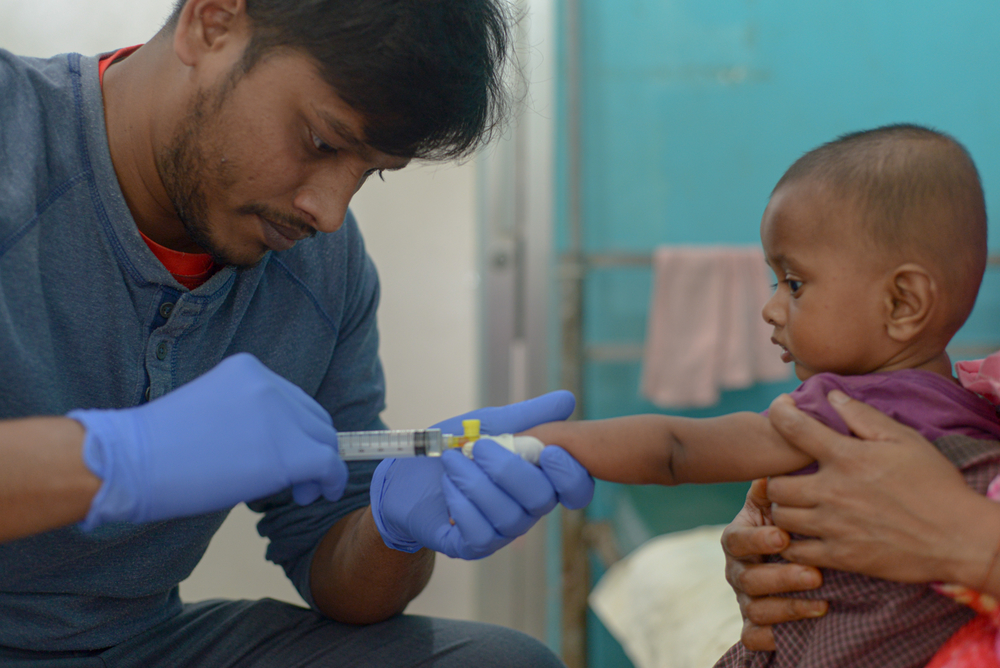 In 2017, 110,000 people, mostly children under five, died from measles - an improvement over previous years, but still tragic for an easily preventable disease. Weak public immunization systems in some conflict-affected countries and record-high numbers of displaced people living in close quarters continue to fuel outbreaks. Since 2006, Doctors Without Borders/Médecins Sans Frontières (MSF) has vaccinated nearly 26 million children against measles.

Measles is caused by a virus which is so contagious that 90 percent of non-immune people who live with an infected person will catch it. It is transmitted via droplets from the nose, mouth, or throat of infected people, by coughing, sneezing, and breathing.

Malnourished children under five years of age are more likely to get severe measles. Those without enough vitamin A in their diets, such as in areas where rice is a main food staple, or those whose immune systems are weakened by HIV/AIDS or other diseases, are also especially vulnerable.

What are the symptoms of measles?

Symptoms appear between 10 and- 14 days after exposure to the virus and include runny nose, cough, eye infection, rash and high fever. A few days after symptoms appear, tiny white spots called Koplik spots may appear inside the mouth.

In some cases, measles causes serious and even fatal complications, including severe diarrhea, ear infection, pneumonia, blindness and encephalitis.

How can measles be prevented and controlled?

Routine measles vaccination for children, combined with mass immunization campaigns in countries with high infection rates and in response to outbreaks, are the linchpin of public health strategies to reduce measles deaths globally. Full immunity requires two vaccinations, with the timing of these doses dependent on where the child lives. Infants at high risk for catching measles - for example, those living in displaced person camps, living with HIV or exposed to an outbreak - should be given their first dose as early as 6 months of age.

Although the measles vaccine is safe and affordable, coverage remains low in countries with weak or disrupted health systems. The vaccine needs to be refrigerated until use and then delivered by injection, and it requires two doses - factors that make it difficult to provide in low-resource settings with hot climates and few trained health workers. Yet preventing outbreaks requires that at least 95% of the population is immune. And babies cannot be vaccinated until they are at least six months old, so every population has vulnerable people without immunity. Most people who survive measles or are vaccinated have lifelong immunity.

How can measles be treated?

There is no specific antiviral treatment for measles. Care involves isolating patients and treating them for complications, including a lack of vitamin A, eye-related problems, stomatitis (mouth ulcers), dehydration through diarrhea, protein deficiencies, and respiratory tract infections. Most people recover within two to three weeks, but up to 30 percent of people infected with measles in low-resource settings die from one or more of these complications.