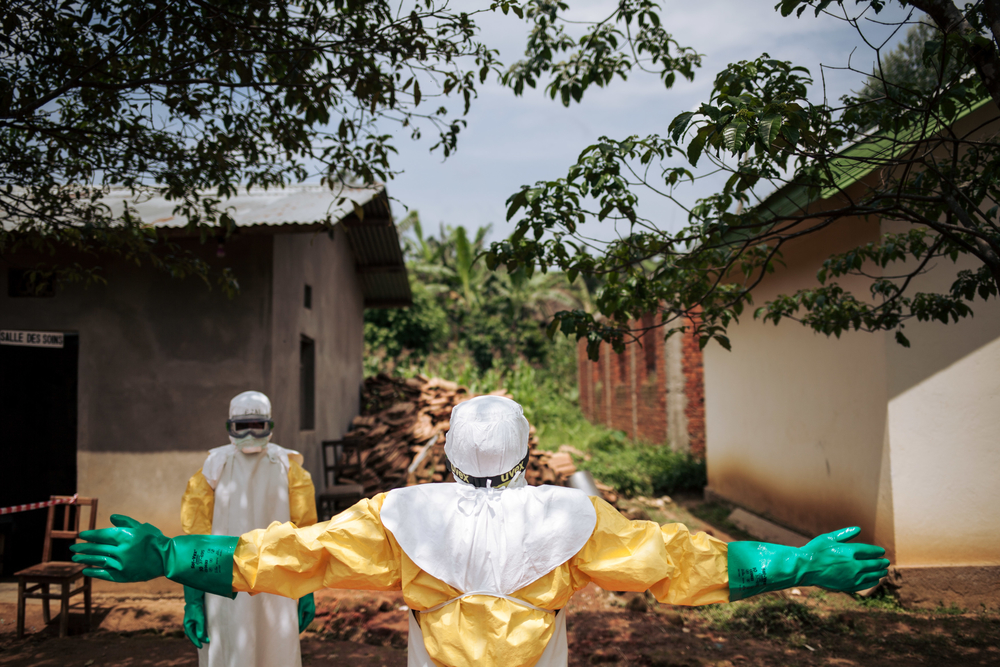 Ebola virus disease first appeared in 1976 and remains one of the world’s most deadly diseases. While Ebola is a fragile virus that can be easily killed with heat, bleach, chlorine and even soap, it is easily transmitted through close contact – leading to rapidly growing outbreaks that are difficult to contain.

The Ebola virus can kill anywhere from 25 percent to 90 percent of people who become infected, which can cause terror in communities where the virus appears. Doctors Without Borders/Médecins Sans Frontières (MSF) has intervened in most Ebola epidemics, including the largest one ever documented—in West Africa from 2014 to 2016. We are currently responding to a massive Ebola outbreak in Democratic Republic of Congo (DRC), the worst to hit that country and the second largest outbreak on record. No cure for Ebola yet exists, but a promising new vaccine and several still-experimental treatments are bringing hope to the battle against this deadly disease.

Ebola is caused by a virus transmitted between humans or to humans from animals. In Africa, people have developed Ebola after handling infected animals found ill or dead, including fruit bats. There are five different strains of Ebola virus, named after where they were discovered: Bundibugyo, Ivory Coast, Reston, Sudan, and Zaire (formerly Democratic Republic of Congo).

In pregnant women, the virus may be transmitted from mother to baby in utero, during delivery, or through contact with maternal body fluids (including breast milk) after birth.

Ebola is not spread through air or water, or from newly infected people who are not yet showing any symptoms.

During an outbreak, the Ebola virus can spread quickly within health care facilities. Proper infection control in health centres is therefore vital to reduce risks for other patients, caregivers, and health workers. Those caring for infected patients must wear personal protective equipment (PPE). Protective gear must be also worn to safely bury Ebola victims, as the virus can be transmitted by touching the bodies of those who have died from the disease.

Symptoms appear any time from two to 21 days after exposure to the virus, typically in eight to 10 days. Ebola usually begins with a sudden onset of fever, weakness, muscle pain, headache, and sore throat. This is often followed by vomiting, diarrhea, and abdominal pain, which may progress to severe disease with altered mental status, shock, multi-organ failure, and sometimes abnormal bleeding. Other symptoms may include red eyes, hiccups, chest pains, and difficulty breathing and swallowing.

The early, non-specific symptoms of Ebola are also common to other serious diseases, including malaria and typhoid fever, and to symptoms of pregnancy complications. For this reason, laboratory testing is essential to identify infected patients and to help ensure that people who test negative for Ebola receive correct diagnosis and treatment for their symptoms.

Ebola is diagnosed by tests that detect the genetic material of the virus. Until recently, these tests required highly trained technicians working in well-equipped﻿ laboratories that were often far from outbreak zones. This meant that patients and health workers often waited days for Ebola test results.

In the current Ebola outbreak in DRC, this waiting time has shrunk to hours - thanks to a new test developed towards the end of the West African epidemic. Facilitated by a small machine called GeneXpert, which is already widely used to diagnose other infections such as tuberculosis, simpler Ebola tests are now being performed rapidly and close to transmission zones.

One caveat is that many patients may test negative for the first few days of symptoms, so a negative Ebola test needs to be repeated after 72 hours if Ebola is strongly suspected.

How are outbreaks prevented and controlled?

Once a case of Ebola is confirmed, a swift response is vital to contain an outbreak. The needs of patients and affected communities must remain at the heart of the response.

The essential measures for containing outbreaks, which are all necessary for effective control, are:

Once an outbreak has ended, it’s critical to maintain surveillance for Ebola in the region, so that any new patient is quickly identified before another outbreak flares up. Another key measure is to support at-risk countries in developing preparedness plans.

Towards the end of the West Africa outbreak, trials for a new vaccine began, and by late 2016 had shown promising evidence that the vaccine was both safe and effective against the Zaire strain of Ebola virus. This vaccine, known as rVSV-ZEBOV, is now being used in response to the ongoing Ebola outbreak in DRC. But for several reasons, including not having official licensure for the vaccine, it must be used under very restrictive conditions that severely limit the speed, and therefore the reach, of vaccination efforts.

Without proven, effective treatments specific to Ebola, until recently treatment has been limited to supportive therapies, starting with medications to reduce pain, fever, vomiting and diarrhea. Other treatments focus on hydration: Since patients lose so much fluid, keeping them hydrated is crucial to avoiding shock and other severe consequences. If patients are alert, able to participate in their care, and are not vomiting, oral rehydration drinks can be sufficient to replenish fluids. Those with severe diarrhea or vomiting, or who cannot drink enough liquid, receive intravenous fluids. Anti-anxiety drugs can also help patients in distress, while vitamins and therapeutic foods are also provided. Psychological support is also provided to help patients and their families cope with a frightening, serious illness, often while simultaneously facing the illness or loss of other family members from Ebola.

But this limited set of tools may soon expand. Four investigational drugs are now being utilized in the DRC outbreak, both as part of a clinical trial and under "compassionate care" protocols (although not all treatments are available at all Ebola treatment centres). They fall into two categories: direct antiviral drugs and immune therapies based on monoclonal antibodies to Ebola. Each of these treatments has distinct advantages and disadvantages involving ease of use and feasibility (injection or slow infusion; frequency of treatment needed; refrigeration requirements). Patients and families are counseled that their effectiveness is not yet proven prior to signing consent for use.