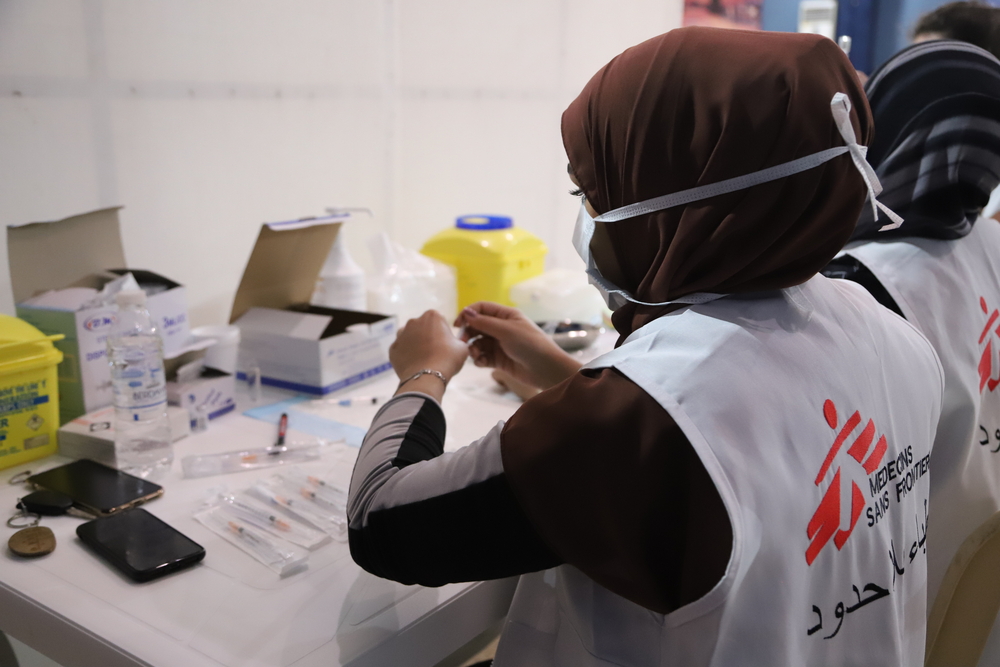 December 14 marks the one-year anniversary of the first dose of COVID-19 vaccine delivered as part of Canada’s vaccine roll-out. The shot of the Pfizer-BioNTech vaccine was administered in Quebec City, just one week after a 90-year-old woman in the UK became the first person in the world to receive the approved vaccine.

Today, over 85% of Canadians over the age of 12 have received at least one dose. In recent weeks, the approval of a pediatric version of the Pfizer-BioNTech vaccine means children between the ages of 5-12 are rapidly catching up. Canada is also now expanding eligibility for third doses for many Canadians.

Unfortunately, in much of the rest of the world, even a first dose is beyond reach. Less than 10% of people in low-income countries around the world have received one. In many countries, even the healthcare workers playing a vital role in responding to the pandemic have not had access to the vaccine, including many staff working for MSF. This threatens to further weaken health systems that were already vulnerable before the pandemic, inhibiting their ability to cope not only with COVID-19 but with pre-existing health concerns, from TB and malaria to the aftermath of conflicts and natural disasters – something that MSF is witnessing first-hand in places such as Syria, Yemen and many of the nearly 50 countries around the world where we maintain dedicated COVID-19 activities.

The irony is that many Canadians have had access to vaccines for so long that they are now becoming eligible for boosters - precisely because they have received not only their first dose but also a second one at least six months ago. The good news is that Canada’s domestic vaccination efforts have been a success: Canada is now one of the most vaccinated countries per capita in the world. However, even as doses continue to be administered in this country, Canadians remain very much at risk from the consequences of leaving so much of the rest of the world without access to vaccines. The risk of the evolution of new variants of COVID-19 like Delta and Omicron is fueled by the circulation of the virus in unvaccinated populations; in turn, existing vaccines are proving less effective against emerging variants.

The Government of Canada has frequently made statements such as “the pandemic is not over anywhere until it is over everywhere” and “nobody is safe until everybody is safe.” Unfortunately, while it recognizes that vaccinating the world is necessary to keep Canadians protected (quite aside from the even bigger issue of protecting the billions of people currently without access to vaccines in the rest of the world), Canada has been slow to translate those words into action.

By this time last year, Canada had secured more than 400 million doses of vaccine, almost all of it via bilateral contracts directly with manufacturers. At over 10 doses per person, this was the most vaccine secured per capita in the world. However, Canada has been slow to share these doses. Indeed, Canada did not make a commitment to share a single one of these bilaterally purchased doses until July, the same month that Canada received enough doses to double vaccinate every Canadian over the age of 12. Many of the doses Canada received by July are still in freezers rather than in arms; meanwhile, Canada did not actually deliver a single pledged dose to the international vaccine distribution mechanism COVAX until September. As of December 7th, Canada had delivered less than 9 million of the 50.7 million doses of vaccine it has pledged to share with COVAX. It has never pledged, yet alone delivered, a single dose of the Pfizer-BioNTech vaccine.

Last week, one year after the vaccine rollout began, MSF called upon pharmaceutical companies to share their technology to increase the global vaccine supply. Today, MSF also calls upon Canada to take action to fulfil its pledges, and to take further action to increase the global vaccine supply, such as supporting the TRIPS Waiver. If Canada promotes third doses within its borders without also doing more to ensure first doses outside of them, this pandemic is indeed not going to end anywhere.