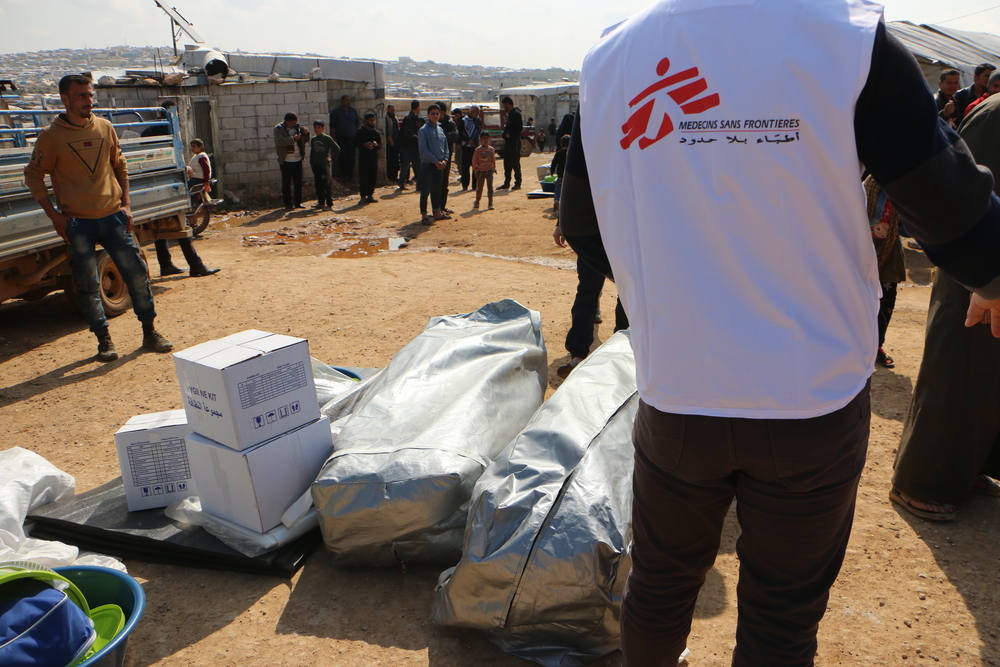 Deir Hassan camp in Idlib province is one of the many camps to which hundreds of thousands of displaced families fled to escape the military offensive conducted by the Syrian government forces with their Russian allies between December and early March. This camp hosts more than 164,000 people in settlements scattered over the hills and, as is the case across north-west Syria, it lacks basic services and is now threatened by the potential spread of COVID-19.

In Deir Hassan camp, the water and sanitation facilities are inadequate for such large numbers of people, raising the risk of water-borne diseases. So far, upper respiratory infections have been the main condition seen by the MSF mobile clinics. But now the COVID-19 epidemic has become a huge challenge worldwide and in Syria.

The Syrian government reported the first case of COVID-19 in Syria on March 23. While no cases have been declared in Idlib province, the last rebel stronghold, the disease may spread very quickly through the region, especially in camps, where people live in large settlements, in overcrowded conditions with little sanitation.

MSF has suspended its mobile clinics in Deir Hassan camp to allow its staff to attend training on infection prevention and control (IPC), and to make sure not to spread the virus. In the coming days, in 10 settlements in Deir Hassan camp, MSF community health workers will hold health education sessions on COVID-19 with displaced families and distribute leaflets and specific hygiene kits.

As MSF teams are now focusing their activity on infection control measures, they are providing assistance for the triage and screening of patients in the two MSF-supported health centres, in Deir Hassan and Tal Karama.

Alongside this, MSF is organizing the distribution of much needed relief items in the Afrin area further north. Many displaced families sought refuge in this area, as it is controlled by Turkish forces and has not seen any violence. Some couldn’t find proper shelter and settled in unoccupied houses, factories or public buildings. In response, an IDP camp in the Bul Bul area is being set up on a dedicated site for 400 displaced families. MSF will supply tents, blankets, plastic sheeting, cooking sets and hygiene kits for them. The tents will be put up in partnership with Al Ameen, a local NGO. And once the tents are ready, the displaced families will move into the camp and receive the relief items.

MSF and Al Ameen also began running mobile clinics last week in the Bul Bul area and in the western Afrin countryside. But these were suspended to allow staff to attend IPC training.

Considering the huge needs of IDPs in Idlib province, MSF’s response remains limited. But it must continue to increase. MSF’s ability to scale-up its assistance will depend on a steady flow of essential relief items, medical supplies and personal protective equipment reaching north-west Syria and also on its ability to send in MSF international staff to support their Syrian colleagues.

MSF has no  presence in Turkey. To be able to scale-up the response, MSF asks all relevant Turkish authorities to facilitate the transit of essential supplies and international staff into north-west Syria.